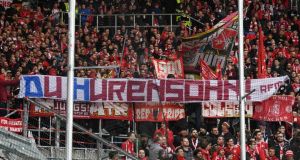 On Saturday evening, a humdrum match between Hoffenheim and Bayern took a turn for the strange. The trouble started in the 67th minute, when Leon Goretzka made it 6-0 to Bayern, at which point the Bayern fans occupying the away section unveiled banners bearing insulting messages.

Applying Fifa’s three-step procedure for dealing with discriminatory behaviour in the stadium, the referee stopped play and an announcement was made pleading with the fans to desist. Soon after play resumed, the Bayern fans produced another offensive banner.

This time the players were called off the field, while the announcer warned the troublemaking fans that any more trouble would lead to the abandonment of the match.

When the players returned after a lengthy stoppage, the two sides played out the 13 minutes remaining by walking around and passing the ball to each other, a non-aggression pact in apparent defiance of the hate pouring off the stands.

At the end, the Bayern players, led by club chairman Karl Heinz Rummenigge, made a point of ignoring their own supporters and instead went to applaud the Hoffenheim fans alongside the home side’s elderly owner, Dietmar Hopp.

The strange thing was that the “discriminatory behaviour” in question was not, as the designers of the three-step procedure presumably had in mind, some racist, sectarian or homophobic outrage.

The problem was that the Bayern banners were calling Hopp, the billionaire Hoffenheim owner, a “Hurensohn” – literally “son of a wh**e”, an insult considered a bit more serious in German than “son-of-a-b**ch” would be in English.

“Everything as it always was. The DFB breaks their word. Hopp is still a Hurensohn,” the first set of banners had read. The second one read simply “Du Hurensohn” with the initial letters D and H coloured blue to stand out against the red text: everyone knew which DH the Bayern fans were referring to.

Hopp is a software billionaire who has been funding Hoffenheim for 20 years, fuelling their rise from the fifth division to the top flight, where they have played since 2008. There are several Hopp-analogues in English football – you think of Jack Walker at Blackburn, Dave Whelan at Wigan, Steve Gibson at Middlesbrough – rich men who have driven their provincial clubs to success at the highest level. In England, these people are generally viewed positively. In Germany it’s a different story.

Don't see this every day...

Bayern and Hoffenheim played keepy-uppy for the final 10 minutes in protest of the Bayern fans who interrupted the game with hateful banners directed at Hoffenheim owner Dietmar Hopp pic.twitter.com/hOODJnWvqf

Bundesliga clubs are bound by the 50+1 rule, which says that clubs must retain control over their own voting rights by ensuring that at least 50 per cent of shares plus one share are owned by the members of the club.

The point of the rule is that no outside investor can take over majority control, so that the clubs continue to be run in the interests of fans, rather than becoming the tools of private commercial interests, profit-seeking investors, egotistical oligarchs, sportswashing regimes and so on.

There are some exceptions.

Wolfsburg and Bayer Leverkusen grew out of the factory teams of Volkswagen and the Bayer pharmaceutical company, so an exemption was created for investors who can prove they have continuously supported the club for more than 20 years.

The Red Bull-owned RB Leipzig have taken a different approach, working around the rule by having only 17 voting members, most of whom are Red Bull employees. Red Bull’s scheme to abide by the letter of the law while flouting its spirit is the biggest ongoing controversy in German football.

And then there is Hoffenheim, where 96 per cent of the shares are owned by Hopp. He is exempted thanks to the rule on long-term investment. Hoffenheim’s presence among the elite has never been popular with fans from other clubs, who resent the billionaire’s toy taking up a place that by rights should belong to another member-owned institution.

Yet Hoffenheim have been in the top flight for so long that most fans had got bored of abusing them. The exception is Borussia Dortmund, whose fans have a special enmity with Hopp and Hoffenheim. In 2018, Dortmund fans displayed a banner with Hopp’s head in a crosshairs and the slogan “Hasta La Vista, Hopp”, prompting the DFB to fine the club and issue a suspended ban on their fans travelling to Hoffenheim.

Last year, the billionaire sued a number of Dortmund fans for again chanting that he was a Hurensohn - he really doesn’t like this - and five were ordered to pay fines. When Hoffenheim played at Dortmund in December there were, of course, more Hurensohn chants and another crosshair banner. The German FA (DFB) announced ten days ago that the suspended sentence would now be applied, and Dortmund fans are banned from games at Hoffenheim for the next two years.

This was controversial, however, because the DFB had previously said that they would end the practice of collective punishment, whereby fans are punished for the violations of ultra groups by being banned en masse from games.

Hence the “DFB breaks their word” component of the Bayern banners. After the Bayern protest on Saturday, yesterday saw another at Union Berlin whose fans unveiled an anti-Hopp banner bearing the single word . . . oh, take a wild guess.

It was not surprising that Dietmar Hopp has reacted badly to all this, describing the hostile fans as “idiots”, claiming that he has no idea why these people seem to dislike him so much, and even going so far as to say it “reminds me of dark times”.

Defamed from a distance

More striking was the tone of the leading figures at Bayern, who appear to view this incident as . . . if not the end of the world in itself, then at least a definite portent of Antichrist. Bayern’s president, Herbert Hainer, issued a statement saying “Dietmar Hopp was insulted in the worst imaginable way by a few idiots with a banner. He was defamed, from a distance, anonymously, namelessly, and in a cowardly way . . . We will take decisive action against those who have discredited FC Bayern and the whole of German football, and trampled on our values.”

In short, the Bayern leaders defended Hopp as though he was one of their own – which, in fact, he is. It’s evident that Rummenigge and Hainer feel more in common with the billionaire Hopp than with the Bayern ultras, who are forever criticising them for signing sponsorship deals with Qatar or increasing ticket prices.

The dream for the management at both Bayern and Hoffenheim would be for their fans to behave more like the passive consumers who fill the stands in England, buying the merch and keeping their mouths shut. But there seems little prospect of that. To the fans it is plain that “trampling on our values” is exactly what Hopp is doing by buying success for his club.

The Bayern fan group Südkurve München issued a statement yesterday saying that such a protest was the only way to draw attention to the DFB’s broken promise on collective punishment. They also expressed their contempt for the idea that the “Hurensohn” campaign was being equated with racism and other forms of social hate. “. . . If you want to stop or interrupt football matches whenever such insults are expressed in the stands, you will no longer be able to play a game over 90 minutes. Today’s interruption was excessive and absurd. Football remains dirty – fans remain rebellious – against collective punishments – f**k you DFB!”

One suspects that the more the leaders of German football squawk about the lack of civility and respect in the stands, the more H-word banners they’re going to get.