As City failed to score a third goal, the drama did come in the closing stages at Wembley 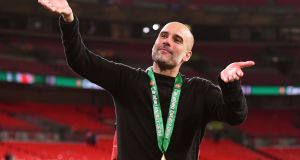 Manchester City had no time for the romance of Aston Villa’s Carabao Cup final story. Pep Guardiola and his players deal only in the hard currency of domestic silverware and they extended their grip on it via a performance of near suffocating control.

It was important to add the qualification. Goals from Sergio Aguero and Rodri had put City in charge and, although Mbwana Samatta halved the deficit against the run of play at the end of the first-half, it looked as though Villa would be some way from the equaliser. Guardiola’s team called the tune for so long that it was almost impossible to foresee the drama at the very end.

But as City failed to score again, the drama did come. The noise from the Villa support that greeted their team winning an 88th minute corner reflected their continued belief in an implausible comeback and it almost happened, there was almost extra-time, when Bjorn Engels met the substitute Conor Hourihane’s delivery with a thumping header. The City goalkeeper, Claudio Bravo, helped it against the post and his team were able to clear. There were further nerves from a City point of view in stoppage-time – including another Villa corner for which the goalkeeper, Orjan Nyland came up – but, deservedly, they closed out the victory.

Guardiola has now claimed eight of the last nine trophies on offer in England, including Community Shields, and this one was a testament to his insatiable hunger and that of his players. Do they get enough credit? Their fans say no but one thing is clear. They will want to add two more cups before the end of the season – the FA Cup and the Champions League. Their hope is that this triumph can be the springboard to another treble, taking in the latter competition, which is the one that they really want.

Villa were chasing a first major trophy since Brian Little led them to this one in 1996 when it was sponsored by Coca-Cola and how Dean Smith, the manager, and Jack Grealish, the captain, both Birmingham boys and life-long Villa fans, would have loved to pull it off. They gave it their all and, after the dogged determination and the late surge, they could leave with their heads held high and applause from their fans in their ears.

It was always going to be a big ask for the team that sits second from bottom in the Premier League and with the worst defensive record and it was not for nothing that the bookmakers had them somewhere between 12-1 and 14-1 at kick-off time.

Guardiola omitted Kevin De Bruyne from his line-up, which might have felt like a relief to Villa, but the City manager was not exactly struggling for high-quality options. Smith’s starting 4-5-1 system betrayed an understandable wariness of City’s threat but it would have hurt him to see how easily they got in for the opening goal.

Raheem Sterling passed to Rodri and, from there, it was a pinpoint ball dropped in over the top of Matt Targett for Phil Foden to use. Foden’s dart forward caught out Targett and, when he headed square, the Villa fans felt their eyes widen with worry. Enter Aguero, whose shot flicked off Tyrone Mings to beat Nyland.

Guardiola started Foden on right of his front three and the 19-year-old was on a mission to impress, to stamp his rich talent on the occasion. There was one moment in the early running when he was knocked off balance by a Villa challenge only to keep his feet and surge forward, tricking past another man on the way. The balance was breathtaking and it was not the only time that this could be said.

Anwar El Ghazi had headed high for Villa in the fourth minute but they would be pinned back and, after City had scored the second and started to monopolise possession, finding spaces in dangerous areas, particularly through David Silva, it was threatening to become an ordeal for Smith’s team.

Samatta’s header represented a stunning bolt from the blue and it re-energised the Villa support offering not only that indescribable rush of a Wembley goal but hope. John Stones got his feet into a tangle and fell over as he failed to deal with a chipped ball from Targett and El Ghazi made ground on the left before crossing. Samatta got in between Fernandinho and Oleksandr Zinchenko to score with a stooping header.

Prior to that it had been all City. Foden shot wide after taking a nonchalantly excellent touch; Aguero was denied by a Bjorn Engels block and Sterling was similarly thwarted by Mings. City’s second had been brutally straightforward, too, with Frederic Guilbert failing to challenge Rodri following Gundogan’s corner. Should the kick have been awarded? The last touch seemed to be off Gundogan rather than Grealish.

City’s dominance of the ball was one thing but, on the occasions that they lost it, they were so quick to win it back, often moving en masse to do so. They also refused to leave the back door ajar – witness Rodri’s tactical foul on Douglas Luiz in the 60th minute as the Villa midfielder broke after a slip from De Bruyne. There was niggle, with Marvelous Nakamba only booked for an excessively robust tackle on Aguero.

Villa found it hard to generate any momentum although, as the second-half minutes ticked down, they knew that one chance could be all that it took to force extra-time. Their fans willed their team to make it happen and it so nearly did, which would have left City to rue missed chances by Foden, Rodri and the substitute, Gabriel Jesus. In the end, though, it was City’s day yet again.