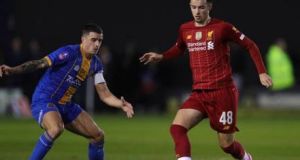 Curtis Jones of Liverpool and Oliver Norburn of Shrewsbury Town during their FA Cup Fourth Round tie in Shrewsbury. Photograph: James Baylis/Getty Images

There was a pleasingly retro feel to Sunday’s Shrewsbury-Liverpool FA Cup tie, with a fightback from the underdog, refereeing mistakes that VAR would have humourlessly cancelled out, and the kind of climactic pitch invasion you seldom see at the top level these days.

Liverpool had picked a few teenagers but also enough senior players to make the draw a genuine upset, enough of a sensation to get the broadcasters once again hyping up the supposed magic of the fading competition. The earlier Sunday matches had followed the more usual pattern of recent years that has TV football fans – i.e. the overwhelming majority – dreading the approach of FA Cup weekends.

The match between Manchester City and Fulham had effectively ended after six minutes when Tim Ream was sent off for pulling down Gabriel Jesus in the penalty area. City walked in another three goals without breaking sweat.

Tranmere Rovers v Manchester United at least offered the incongruous spectacle of United’s Gen-Z stars running about on a pitch that looked like guerrilla marketing for 1917.

Go back 20 years and even Old Trafford sometimes looked like that at this time of year, not that these players could remember. Did these kids even know what mud is, and would they get hopelessly bogged down in it? No, instead United were 5-0 up at half-time, freeing up their supporters to concentrate fully on the more important business of abusing Ed Woodward.

The United and City games had followed the general recent pattern of Cup games, which are good only at reminding you that the top teams are now so pumped up on TV money that there is no point watching them play against anyone except each other.

The usual charge against the FA Cup is that it has become “meaningless” – a word that sits oddly alongside the scenes of jubilation at Shrewsbury.

But matches always have some meaning for those fans who have made the effort to be there. It’s when you can watch without putting in the effort – like the vast majority of the audience for these matches – that the problems begin to arise.

When football stops being a real-life social activity you go to with your friends, and becomes a TV show that you watch as often as not by yourself, you start to need extra ingredients to keep it interesting. Besides the events of the game itself you also begin to need a series arc of which each game is an individual episode – some kind of overarching narrative structure to make sense of it all – you might call it “meaning”.

In top-level TV football today the series arc is provided by the season-long structures of the Premier League and the Champions League. The early Cup matches, which are usually one-sided pastings featuring one disinterested big team and one inadequate small one, with the notional point of it all being to win a trophy that in recent years has not been considered important enough to keep the manager who wins it in his job – these matches no longer fit in.

And as for replays – the entire concept is at odds with the series structure. You’re saying it’s as though the match never happened and we simply have to do it all over again next week? How does this farce advance the overall plot?

Jürgen Klopp has at least injected some intrigue into the fourth round replays at the beginning of February by announcing that he and his first-team intend to go on holidays as planned and let the youth team and under-23 coach handle Shrewsbury at Anfield.

He thus helpfully casts himself in the role of destroyer of English tradition, and guarantees that he will have to spend the next few days – and possibly the rest of his career in English football – defending his decision.

It’s one thing for English journalists to complain in normal circumstances that the FA Cup is no longer very interesting, it’s quite another to stand by and let the grand old competition be disrespected by a German.

Liverpool have cited a letter they received from the Premier League reminding them that the point of the winter break is “to provide their players with a break from the physical and mental rigours of playing matches during the season”. The letter went on to say: “Clubs should not arrange competitive or friendly matches with other clubs during the Mid-Season Player Break.”

But Klopp’s stance creates an awkward situation not only for the FA but also for the managers of Tottenham, Southampton and Newcastle, who also face replays at the beginning of February.

Will José Mourinho, Ralf Hasenhüttl and Steve Bruce now follow his lead and absolve their own first-team players of the responsibility of having to contest these draining replays, and allow them to go on the holidays they have already booked? Or do these unfeeling slave-drivers simply not care as much about player welfare as Saint Jürgen?

The situations of Southampton and Newcastle are clearly a little different from that of Liverpool; without European football fixtures congestion is not such a big concern. However, Spurs are in the Champions League second round alongside Liverpool, so Mourinho’s response in particular will be eagerly awaited.