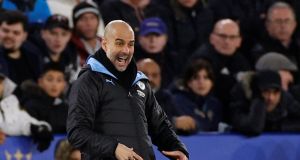 Pep Guardiola: It’s difficult to imagine Guardiola at a club that is not in the Champions League, particularly if he has been excluded from it through no fault of his own. Photograph: John Sibley/Reuters

For all the success Pep Guardiola has enjoyed at Manchester City, he’s also had to swallow a few bitter pills – the late Raheem Sterling winner against Spurs disallowed by VAR, Fabinho scoring at Anfield this season after Trent Alexander-Arnold’s handball at the other end.

That Liverpool game was perhaps the angriest he’s been on the touchline, immortalised in the image of him shouting “Twice! Twice!” at the fourth official after VAR had waved through yet another Liverpool handball.

His angriest public moment of the last three and a half years, however, came not during a match but in a press conference, after City had completed the domestic treble by beating Watford 6-0 in the 2019 FA Cup final.

Guardiola walked in expecting to be lauded for having coached his team to a unique achievement in English football history. Instead he found himself answering questions like: “Some will look at this achievement and question whether it’s diminished in some way...” and “Roberto Mancini was discovered to have had separate payments from Abu Dhabi while he was manager, have you ever had separate payments from Abu Dhabi while you were City manager?

He answered, with a snarl of disgust.

“Do you know the question you are asking to me? Do you know the question ask you me [sic], did I receive money for another situation, right now today? Honestly? Do you think I deserve to make this kind of question, what happen Roberto I don’t know, the day we won the treble, did I receive money from other situations? Oh my God.”

Guardiola’s furious expression, even more than his indignant, disbelieving words, told you what he thought of the implication. But this was simply his most direct encounter with the scepticism that has haunted the City project from the beginning, the “yes, but...” that always follows them around. He never heard “yes, but” at Bayern or Barcelona.

More than most coaches, Guardiola is self-consciously concerned with his reputation and legacy. That’s why he enthusiastically co-operates with fly-on-the-wall books and documentaries, ensuring a detailed first draft of history is available for the benefit of future biographers.

His self-image is that of the guy who took over Barcelona aged 37 and “destroyed football”, as he once famously told a meeting of his City players. Even individual matches are never just about the result, his team is always standing for a bigger point in a larger argument about how the game ought to be played.

So it was always going to be interesting to see how he reacted to the ominous progress of an investigation that could potentially asterisk-ise a whole swathe of his career.

As the story of City’s looming problems with Uefa over alleged breaches of Financial Fair Play developed over the last 15 months since Der Spiegel’s Football Leaks revelations, Guardiola always stuck to much the same line. As he stated after that Cup final: “I listen to my chairman and my CEO, they give me the arguments for why we are under investigation and I trust them. They tell me we are fair and we absolutely follow the rules, I believe them.”

That belief must have been shaken ten days ago when the independent adjudicatory chamber of Uefa’s Club Financial Control Body announced that it had found City had committed “serious breaches” of club licensing and FFP regulations, and was recommending they be fined and banned for two years from European competition.

It’s one thing to dismiss Spiegel articles as froth and hysteria, but coming direct from the governing body these charges sounded heavy.

And yet when Guardiola addressed the charges last week it soon became clear that his public stance had not changed, at least not yet. He still took his bosses at their word.

“When someone believes he is right he has to fight until the end, no matter, 100 per cent, and I think that is what the club is going to do... It’s a sensitive issue to talk about the legal actions because I don’t know it, I’m not a lawyer... I spoke with the club, with my chairman and my CEO, and I follow. I believe in them, so we are going to do it. I trust what they told me.”

Guardiola has talked recently about the prospect of extending his current contract with City, which has one more year to run, and he insists that no matter what, he will still be at City next year – unless the club sacks him first, a possibility he has mentioned a couple of times this month, despite it seeming like the most improbable thing City could do.

There is no reason to doubt Guardiola is serious when he says he’s still going to be at City next season. He means it, just as the City hierarchy meant it when they assured him there would be no problem with Uefa and FFP. And if City’s appeals against the ban were to fail, and the hierarchy’s reassurances were proven worthless? Then all bets are off.

It’s difficult to imagine Guardiola at a club that is not in the Champions League, particularly if he has been excluded from it through no fault of his own. The whole point of his being in Manchester is to win this competition. There is now a real chance that the only way his City story can have a happy ending is if they win it this season.

The good news is that Real Madrid are perhaps the best team they could be facing at this decisive moment. There is a popular perception that Madrid always turn up in these big European matches, but that’s an illusion created by the decade of Cristiano Ronaldo.

The last six seasons that Madrid have played in the Champions League without Ronaldo, they’ve been knocked out in the last 16. Before he came, early European elimination had become a virtual club tradition – one they enthusiastically re-embraced against Ajax in their first post-Ronaldo season. On Saturday they lost 1-0 to Levante and lost Eden Hazard to another ankle injury.

Madrid are so big that beating them would a milestone in City’s European history, yet so vulnerable that City could tear them to pieces. Doing so would be Guardiola’s best European moment at City, and the best way to convince his players that what might be their last season in Europe for a while might also be their best.