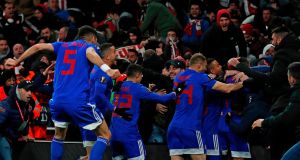 Olympiakos’ Youssef El-Arabi and teammates join supporters as they celebrate after the late winner against Arsenal in their Europa League clash. Photo: Adrian Dennis/AFP via Getty Images

Arsenal 1 Olympiakos 2 (aggregate: 2-2 – Olympiakos go through on away goals)

This was a desolate night for Arsenal and the consequences may be far-reaching. They had been taken to extra-time by Olympiakos’s Pape Abou Cissé but, true to form, Pierre-Emerick Aubameyang came up with a breathtaking finish that sparked wild celebrations and seemed to bail out a listless display. Mikel Arteta’s players then learned that you cannot always get away with it: Youssef El Arabi’s 119th minute winner dumped them out of the Europa League and ensured an outstanding domestic run will be required in order to offer any hope of a return to the top table in May.

The temptation, before a ball had been kicked, was to suggest a large element of the doubt surrounding this tie’s outcome had already been eliminated. Olympiakos are awkward opponents on their own turf but Alexandre Lacazette’s late goal in Piraeus had negotiated that hurdle and the Greek Super League leaders have questionable form for upsetting the odds when visiting clubs from Europe’s traditional strongholds.

Arteta was on Arsenal’s books the last time they did, winning 3-2 at this venue in September 2015, and perhaps that memory was priced into a team selection that left little to chance. The big guns were all wheeled out in deference both to the task in hand and the wider truth that, whatever anyone might think about an upturn in domestic form that gives room for cautious optimism, this competition remained their most viable route back into the Champions League.

If the ideal scenario was for the first choices to race out of the blocks and put things beyond doubt, Arsenal’s application fell short in the opening exchanges. Instead they seemed happy to give Olympiakos, tidy enough but bereft of an obvious weapon, the lion’s share of possession and bide their time. No punishment was forthcoming, a couple of eyecatching switches by the evergreen Mathieu Valbuena virtually the sum of the visitors’ early probings

When Arsenal did spring forward, Granit Xhaka and Nicolas Pépé saw shots blocked in the same move. The latter might have done better midway through the half when, having been sent away by Lacazette, he was bundled over on the edge of the area by a combination of Ousseynou Ba and Abdoulaye Camara.

Pépé’s left foot had already illuminated this campaign from more difficult positions, two marvellous free-kicks preventing ignominy against Vitória Guimarães, but his latest effort was swiped a yard off target.

Were their performance not so scrappy, a generous onlooker might have interpreted this as an expert containing job from Arsenal: an exercise in keeping their opponents at arm’s length. But cheap concessions by Xhaka, Dani Ceballos – twice – and Mesut Özil all gave the lie to that thought. So did the chance Olympiakos created in the 34th minute, which should have brought them level. A swift break, which stemmed from Héctor Bellerín being robbed, saw Youssef El Arabi send Camara clear down the inside-left channel. The angle was good but, never looking confident on his left foot, the midfielder screwed awkwardly into the side netting.

Lacazette briefly thought he had eased the growing tension but Bukayo Saka had strayed offside in providing the assist and Arteta, increasingly animated on the side, had his work cut out at the interval.

The sense was that Olympiakos, shooting towards a 5,000-strong travelling support in the second half, had been avoidably thrown a bone. It took them seven minutes to snatch it greedily between their jaws. A slip from Bellerín led to a left-sided corner and far worse would follow. Valbuena rarely hits a bad ball and his whipped inswinger flew over the head of Shkodran Mustafi into the path of Cissé, who nodded past Bernd Leno on the run.

Cissé was playing only because his defensive teammate Rúben Semedo was suspended after a booking in the first leg. The tie had now changed beyond recognition; Arsenal looked ragged and were grateful to Leno almost immediately when he tipped over a drive from the left-back Kostas Tsimikas at full stretch.

Xhaka briefly worried José Sá from 25 yards but his effort fizzed wide. Arsenal’s sluggishness was a puzzle and, even though the home crowd had woken up to the situation’s severity, by the half’s midway point Arteta was scanning his substitutes’ bench in search of a solution.

Lucas Torreira eventually replaced Ceballos. When Xhaka found Pépé with a radar-like ball, José Sa saved well from the resulting shot and Lacazette narrowly failed to finish in the aftermath. Lacazette then shot over from an angle and, as the clock ticked down, a few signs had at least presented themselves that Olympiakos were tiring.

Yet a moment’s inattention at the other end would finish everything, and only a last-ditch interception from Shkodran Mustafi prevented El Arabi from running through in search of a winner. Neither side would find one inside 90 minutes and Arsenal would have to find a means of approving what had been, by some distance, their worst performance of Arteta’s two-month reign.

Lucas Torreira replaced Ceballos and Arsenal summoned a semblance of tempo, but at too late a stage to avoid extra time. The Olympiakos substitutes Bruno Gaspar and Giorgos Masouras both came close to settling the issue either side of the additional period’s halfway mark and those misses only deferred the drama to come.

Arteta sprinted up and down the technical area when Aubameyang, who can rarely have had a quieter night, watched a dropping ball and cracked in a tremendous overhead volley seven minutes from time. But that had nothing on the celebrations when El Arabi, jabbing in Masouras’s low cross, applied an improbable hammer blow. There was still time for Aubameyang to save Arsenal’s night and perhaps their season, but against all odds he shot wide. – Guardian

Ken Early: Despite coronavirus, Premier League season must be finished if at all possible
Here is your handy guide to sport on television this week

1 Sky Sports customers set to save on bills until Premier League returns
2 Gerry Thornley: Changes to tackle laws could transform rugby by time of next World Cup
3 Jack Grealish needs to show that his remorse is real this time
4 ‘This is sick’ - seventh-tier Swedish club cancels friendly after betting mayhem
5 Tottenham give 550 non-playing staff a 20 per cent pay cut
Real news has value SUBSCRIBE
Crossword Get access to over 6,000 interactive crosswords