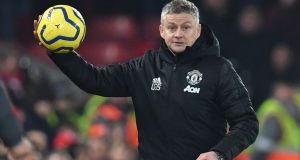 Ole Gunnar Solskjaer: “I am not going to protect myself. I am going to do what is best for the club, what I think and we feel is right for the club and I will never put myself before the club.” Photograph: Paul Ellis/AFP

Another big match against rivals, another Rorschach test for fans of Manchester United.

What did they see in that 90 minutes at Anfield? Was it an embarrassingly one-sided defeat that proved United are further behind Liverpool than at any point since they were relegated in the mid-1970s?

Or was it another spirited display – a brave rearguard action that could even have ended in a draw, if Aaron Wan-Bissaka could cross – a kind of moral victory that shows the heart of this team is in the right place under Ole Gunnar Solskjaer?

Under Solskjaer there has been little obvious evidence of progress. In fact the team looks worse than it did during the surprise winning run with which he began a little over a year ago, and his points-per-game record this season is worse than José Mourinho’s in the half-season preceding his sacking. Yet most Manchester United fans still seem prepared to persevere with him.

The argument for Solskjaer is emotional. As a celebrated former player who distinguished himself with his loyalty and team-mindedness, he “gets” the club. He is a kind of bulwark against the ownership and corporate management, who are motivated only by profit, who have stated openly that they can keep making money without winning and who seem happy to keep doing so.

Fans feel that with Solskjaer as coach, there is at least one part of the club hierarchy they can trust, at least one person who understands the club like they do, and who shares the same priorities.

Solskjaer plays up to this. Asked ten days ago whether he would pressure the board to make signings in January, he gave a familiar speech.

The next day, Marcus Rashford was pictured on his way into Old Trafford holding a little plastic case that reporters quickly identified as a container for a Melmak fracture-healing ultrasound device, described as delivering “a convenient, 20 minute per day, home-based treatment which improves the speed of healing of fresh fractures and non-unions”.

Fractures? Rashford didn’t appear to be showing the effects of any fresh fractures against Norwich: instead he underlined his importance to the team with two goals, bringing him up to 14 for the season in the league.

The tone was odd. Surely he should know that there is no shame in getting injured?

On Wednesday, United played Wolves in the FA Cup third round replay at Old Trafford. Rashford was on the bench, but after 64 minutes, with the game still goalless, Solskjaer turned to his top scorer to break the deadlock.

A few minutes later Rashford was involved in a collision with Matt Doherty, which is a bit like being run into by a brick wall. He lay face down on the ground in obvious pain, then tried to play on for a few minutes before admitting defeat. He had lasted 16 minutes, but at least United had scored the winner during this brief sortie.

Rashford tweeted after the game: “Never want to feel like I’ve let my teammates, the club and most importantly the fans down so did my very best to carry on tonight and was gutted to come off.”

The tone was odd. Surely he should know that there is no shame in getting injured?

Only on Sunday was the full extent of his injury confirmed. It appears Rashford had gone onto the pitch against Wolves carrying one stress fracture and had come off it with two. The aggravated injury will keep him out for up to three months, which seriously damages United’s hopes of overtaking Chelsea for the fourth Champions League spot.

Perhaps it could be dismissed as bad luck – if it was the first time that something like this had happened. But United players bravely playing through injury at the cost of making their injuries worse has become a definite theme of the season. On St Stephen’s Day, Scott McTominay injured his knee tackling Sean Longstaff in the opening exchanges. He played the rest of the first half on what was later confirmed to be torn knee ligaments.

“The boy has got the biggest heart of the lot,” Solskjaer said. That big heart is not expected back in action until March.

McTominay was replaced that day by Paul Pogba, who himself was just back from a lengthy injury lay-off. Pogba’s injury troubles started in September when he missed three matches due to an ankle problem. His return to the team surprisingly came in a Carabao Cup game against Rochdale – the sort of game when most big clubs play the reserves. It ended up going to extra time and Pogba played all 120 minutes.

Before the next match, which was five days later against Arsenal, Solskjaer revealed that Pogba’s ankle had swollen up after the Rochdale game. Nevertheless he played the full 90 minutes against Arsenal. He then missed the next 17 matches with ankle problems. He returned to the team around Christmas, coming on against Watford and replacing McTominay against Newcastle. After Newcastle, the ankle flared up again to the extent that Pogba required surgery: another month or two on the sidelines. Are you beginning to see a pattern?

The player who was causing most concern recently was actually not Rashford but rather Harry Maguire, who was reported to have torn a muscle in his hip in the FA Cup match against Wolves. After missing the Carabao Cup semi-final against Manchester City, a match in which City’s forwards had fun giving Phil Jones and Victor Lindelof the runaround, Maguire was surprisingly back in the first team against Norwich three days later.

“I had a problem with my muscle, but it was only a small muscle and I normally recover quick and can play with a bit of pain,” said Maguire. Only a small muscle? Some of them might be small but they’re all there for a reason.

Nobody can question the determination of these Manchester United players (except Pogba, on whom it always seems to be open season) but perhaps discretion would be the better part of valour when it comes to managing these injuries.

That they play through these injuries is at the discretion of a coach who claims to be managing selflessly in the long-term interests of the club, but who has actually taken a series of short-termist gambles for which several of his players are now paying the price.

Solskjaer was once known as the baby-faced assassin, the sweet and innocent boy with the cold ruthless heart of a penalty-box killer. Let nobody be fooled into thinking that Solskjaer the coach, the humble custodian who speaks constantly of his pride at being chosen to serve such a great institution, is not also motivated by a vigorous self-interest.