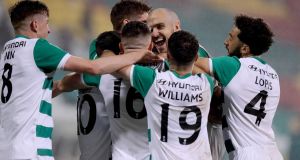 Shamrock Rovers players celebrate with Joey O’Brien after he scored the winning penalty in the Europa League first qualifying round against Ilves Tampere at Tallagh Stadium. Photograph: Ryan Byrne/Inpho

Shamrock Rovers earned their place in Monday’s draw for the next round of Europa League qualifying with a remarkable show of nerve through an extended penalty shootout that was finally decided in their favour when Joey O’Brien sent Ilves Tampere skipper Mika Hilander the wrong way.

Having done so well to survive the entirety of extra time with just 10 men after the dismissal of Liam Scales, the hosts initially looked to be trouble when it came to spot kicks as Jack Byrne had his low effort pushed onto the post.

What followed was remarkable though and the pity of it was that aside from a small crowd of gatecrashers, perched on a wall behind the goal at the far end of the ground, there was next to nobody there to witness the drama.

Jair Tavares Silva effectively surrendered his side’s advantage by driving his penalty against the post after Alan Mannus had gone the wrong way and Rovers players then scored 12 spot kicks on the trot before a wonderful stop by Mannus finally put them in a position to wrap things up and O’Brien powered the ball into the top right corner.

In a stunning conclusion to a night that seemed at times as though it might not end so well, the home side will feel they were unfairly handicapped by the early penalty handed to the visitors by the Slovakian referee but despite Stephen Bradley’s confidence on the issue beforehand, their finishing also proved to be a problem once again.

Rovers had comfortably the better of the first half and having cancelled their opponents’ lead through a really fine strike from Graham Burke, they looked set, for a spell, to push and really start to dominate the proceedings. It never quite happened, however, and having always managed to maintain a foothold in the game, the Finns retook the lead just over an hour in.

The penalty, to be fair, did look to be an injustice. Neither side had really settled into things when it was given and the hosts might have been quicker to close things down as Tampere worked the ball forward from midfield then out towards the left. As Eero Tamminen crossed, the ball appeared to catch O’Brien clean in the face but the referee reckoned there had been a handball and Lauri Ala-Myllymaki beat Mannus with a spot kick driven almost down the middle.

Rovers reacted well to the ninth-minute setback, however, with Byrne moving the ball nicely in midfield.

The should really have been level again within just three minutes when Ronan Finn’s cross from the right reached Aaron Greene who the time and space to pick his spot. In a persistent downpour that must have made his life difficult, Mika Hilander did well to get off his line and close the angle but really, it never should have been enough to make the difference.

Greene, to be fair, made amends not long after when the home side pressed their opponents from a kick-out and the striker won the ball out wide before squaring it for Burke. The finish was perfect with a curling shot hit from the right side of area clipping the inside of the left hand post as it went in.

It wasn’t too long before Burke found himself in a somewhat similar position and attempted a similar shot but this time his effort was fractionally high and skimmed the top of the crossbar on its way over.

The locals were well enough on top through what remained of the half to put themselves in a winning position but a couple of deflected shots were as good as it got, one of which required Hilander to make a scrambled save.

There were flashes of vulnerability to quick break as when Byrne had an attempted through ball blocked down and Rovers suddenly looked a little over committed. On that occasion, though, O’Brien read the danger well and stepped out of defence to stop the Tampere break in its tracks.

Remarkably the general pattern of the half was to be repeated after the break with Joona Veteli restoring the Finnish side’s lead with a cracking shot from just outside the area and Roberto Lopes producing another European goal to go with the two from last year to pull the home side level again.

Dean Williams arrived on and Greene moved out wide where he had already done most of his best work, and Rovers had the better of the exchanges but struggled to seriously test Hilander.

They still looked the better bet to come through on top in extra time until Scales shifted the balance of things significantly with a couple of minutes of the 90 remaining by picking up his second yellow of the night. Bradley’s side was up against it again but the night was really only getting started and they would have the character to come through in the end.