What are Messi’s options if he can force a Barcelona exit?

If he does leave the Catalan capital, Messi may surprise everyone with his next move 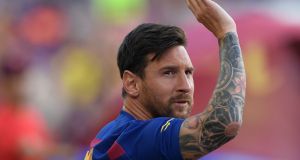 As the minutes ticked by after the bombshell news that Messi wanted out of Barcelona, it was little surprise to see City emerge as early favourites for his signature. Pep Guardiola and Messi won two Champions Leagues together at Barça, and there may be a temptation to reunite for another tilt at the trophy.

Guardiola has routinely said he hoped Messi would finish his career at Barça, but rumours persist in Catalonia that the duo have been in contact in recent days. City also have the financial means and the successful appeal against their two-season Champions League ban now looks like perfect timing.

There are caveats, though; defensive recruits are the priority this summer, and the club have tended to steer clear of signing players who are past their prime. Messi may be a different story – and reports that rivals Manchester United are also interested may force them into a quick decision.

In the aftermath of his team’s Champions League defeat by Bayern Munich, Thomas Tuchel found himself fielding questions about summer spending. Such is the life of a head coach at PSG, and the German admitted he would be seeking signings – but played down the prospect of bringing Messi to Paris.

Tuchel has said his priority is reinforcing his defence and that he expected Messi to end his career at the Camp Nou, but added: “Which coach says no to Messi?” That implies that any decision will come from PSG’s Qatari backers, and the early indications are that they are keen to meet with Messi’s representatives.

Barcelona fans have long anticipated a reunion between Messi and Neymar – it would be a bitter pill indeed if it were to happen at PSG, with Kylian Mbappé completing what could be an unstoppable front three.

Something of a wild card among the clubs in the frame, Antonio Conte’s Inter side appear an odd fit for a player driven to despair by Barça’s Champions League failures. Inter haven’t won a trophy since 2011 but are emerging as a European force again.

A move to Italy would also offer Messi the chance to resume domestic battle with Cristiano Ronaldo, whose Juventus side pipped Inter to the title last season. But could it really happen? The club’s former president Massimo Moratti believes the owner, Suning Holdings, wants to sign Messi, based on an unusual sighting.

“I saw the Suning advert that used Messi’s shadow in the Duomo [Milan’s cathedral],” Moratti said. “It’s not a simple deal . . .the biggest obstacle to overcome is what Messi wants.” Perhaps bringing silverware back to San Siro will be the ideal challenge.

In 2018 Messi hinted that one day he could see himself at Inter. Inter Miami, that is. In a video congratulating him on getting an MLS franchise, Messi jokingly told the club’s owner, David Beckham, to “give him a call in a few years”.

The Argentinian appears unlikely to answer that call just yet with Europe’s elite chasing his signature, but there are a few other options that could turn his head. One is a return to Newell’s Old Boys, the hometown club he left for Catalonia 20 years ago.

A return to Rosario sounds romantic but Messi would have to accept a huge drop from his £500,000-per-week salary. Moves to reunite either with Xavi – the manager at the Qatari club Al-Sadd – or Andrés Iniesta at Japan’s Vissel Kobe look like long shots.

The final option for Messi – and the one considered most likely by bookmakers despite Tuesday’s dramatic developments – is that he stays at Barcelona. Messi’s request to move on is genuine, and not thought to be a purely political move – and by demanding the club allow him to leave for free he risks an acrimonious legal battle from which there may be no coming back.

That said, the fallout from Messi’s decision could mean the situation changes rapidly. The club president, Josep Maria Bartomeu, was already under severe pressure – and fans have been quick to take to the streets, calling for him to resign. The former president Joan Laporta, who was at the helm during Guardiola’s and Messi’s golden era, has added to those calls.

If Bartomeu going means Messi stays, it would appear to be no contest – and the same might even be said for the new manager, Ronald Koeman. The Dutchman reportedly made a bold move in his first meeting with Messi, telling him his “privileges” at Barcelona were no more, and potentially forcing Messi’s hand. Koeman’s gamble is based on the notion that no player is bigger than the club. In Messi’s case, that may not be true. - Guardian