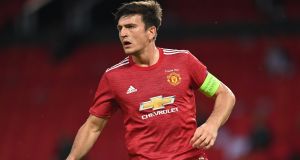 Harry Maguire has been withdrawn by Gareth Southgate from the England squad to face Iceland and Denmark early next month after being convicted in a Greek court following a high-profile fracas outside a bar in Mykonos last Thursday night.

The Manchester United captain was found guilty of aggravated assault, resisting arrest and attempted bribery by a three-member misdemeanours court convening on the Greek island of Syros.

Maguire was arrested and later charged following a violent argument outside a bar in Mykonos which also involved police officers. He had vigorously denied all charges and has said he will appeal.

Maguire had been named in the squad at 2pm with his trial ongoing. The guilty verdict was delivered at 5.15pm and at just before 8pm Southgate announced he had withdrawn the central defender.

Southgate said: “In light of this evening’s developments, I can confirm I have withdrawn Harry Maguire from the England squad for the matches against Iceland and Denmark.

“As I said earlier today, I reserved the right to review the situation. Having spoken to Manchester United and the player, I have made this decision in the best interests of all parties and with consideration of the impact on our preparations for next week.”

Before the verdict, Southgate said of Maguire: “It is clearly a decision that is not straightforward and a decision that in the end I could only take on the information I have. I have spoken with Harry, I have the insight to the story which is very different to what is being reported. You can only make decisions on facts you are aware of.

“If facts or information changes I will have to review that decision, but I have a fantastic relationship with the boy, he has been a fantastic character for us … it’s important that he knows he has my support at this moment.

“I’m not going to get into hypotheticals of what might happen, but I have got to reserve the right to review if further information becomes available. You always make decisions to the best of your ability given the information you have. People may agree or disagree with those decisions, but it is a position where every manger finds himself.

“Harry regrets the fact he has brought that sort of focus and attention to the team - he apologised for that – but also has his own side of the story.”

Southgate has called up City’s Raheem Sterling, who attended Usain Bolt’s birthday party in Jamaica last Friday. Bolt has subsequently announced that he is self-isolating after taking a Covid-19 test.

There are recalls for Kyle Walker, Eric Dier, Michael Keane, James Ward-Prowse and Danny Ings but no place for any specialist left-back, with Danny Rose overlooked and Ben Chilwell and Luke Shaw injured. “Danny Rose, we felt at this moment in time his performances need to be a little bit better,” Southgate said.

Addressing the first-time call-ups the manager said: “We are a year away from a European Championship and let’s see if they can start to break into that team, that squad. It gives us great competition for places.”

1 The Offload: Ireland are stuck in no man’s land
2 Nicky English: Galway and Waterford face battles with fatigue in All-Ireland semis
3 Every kind of wind imaginable was against Tipperary football - and they came through
4 Former Ireland assistant manager Maurice Setters has died aged 83
5 Crowds of 4,000 to return to sporting events in England from next week
Real news has value SUBSCRIBE
Crossword Get access to over 6,000 interactive crosswords