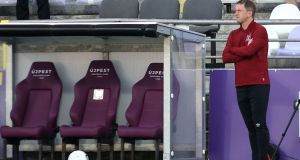 Vinny Perth has left Dundalk less than 24 hours after his side were well beaten in their Champions League qualifying game against NK Celje in Hungary. Alan Reynolds is expected to take charge of the side for Saturday’s league game away to Sligo Rovers with the club then expected to bring in an interim manager next week.

Perth had been at the club since 2013 when he arrived to work as assistant to Stephen Kenny and he was regarded as having played a major part in Dundalk’s tremendous success during the seasons that followed.

When Kenny was appointed as manager of the Irish under-21 side at the end of 2018, the Dubliner was handed the top job and he enjoyed a tremendous first season, leading the side to another league title as well as victories in the League Cup and Unite-sponsored Champions Cup. The only disappointment was an FAI Cup final defeat by Shamrock Rovers last November.

This season has proven more difficult. When the campaign was halted due to the Coronavirus back in March, the defending champions were just three points adrift of Rovers at the top of the table but their form has been poor since the restart and after three games without a win, they now trail Stephen Bradley’s side by eight points and sit third in the table.

Perth’s bigger problem may have been the European defeat, however, and the manner of it with the team conceding three soft goals, all of which were down to individual errors. It will not have helped that Celje really did not look like that formidable a side.

In reality, though, there has been talk of tension behind the scenes – both between the manager and the club’s American owners and with some of the players. For some time and it is believed that Perth found himself having to deal with senior officials at the club making suggestions on team selections, something that is believed to have occurred on Wednesday night when, it seems, he resisted any interference.

There has also been talk of issues with a couple of senior players, although Perth had himself suggested last season that the transition from assistant to manager might present challenges.

Still, the club had sought to strengthen for this campaign and it is a shock that the decision appears to have been taken to make a change after what has essentially been a handful of disappointing results.

Reynolds, who joined Perth’s staff after leaving Waterford during the summer, is now set to take charge for the weekend but with the club still in the Europa League and a lot to be played for in the league, it is believed that the club want to bring in an outsider to oversee things until the end of the season.

Mark Burton, a long time youth coach at Manchester City who had been working with the Dundalk squad at the behest of the club’s owners until his departure a few weeks ago, appears to be one possibility.

Club chairman Bill Hulsizer declined to comment on the situation when contacted by The Irish Times.