Despite everything thrown at him, the football coach has something to covet – optimism 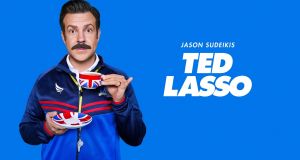 Ted Lasso is based on the character NBC showcased during their Premier League coverage in 2013. The idea had potential: a lower league college football coach from Kansas drafted to London Premier League Team AFC Richmond to help the club.

Last year was a weird one. This year has started out even stranger – I found myself rooting for a white, mid-western man who was incredibly unqualified for a job he had gotten through dubious circumstances. No, I’m not talking about that guy, I’m talking about Ted Lasso.

Ted Lasso is played by Jason Sudeikis of Saturday Night Live fame and based on the character NBC showcased during their Premier League coverage in 2013. The idea by Sudeikis and Brendan Hunt, while corny, cringe-worthy and incredibly American, had potential. A lower league college football (the egg-shaped one) coach from Kansas is drafted to London Premier League Team AFC Richmond to help the club.

I’m not going to delve into the plot too much, I’m going to leave it up to you to watch it. But, I started watching it during an incredibly crazy period in my life. I’m a binge-watcher by trade, but I freakishly managed to finish season 1 on Apple TV in literally one day. Yes, I know I have problems. Quick disclaimer: you do not have to be a sports fan to enjoy this. My friends who resent sport were obsessed.

The overriding theme and emotion throughout the show oddly resonated with me. Optimism. Despite everything thrown at Ted, through long-distance relationships with his wife and child, players refusal to accept him as a head coach and an owner who probably isn’t interested in the club, Ted maintains a spirit I’d naturally resent in normal circumstances. It’s not that his optimism despite every hurdle and thing hurled at him is too in your face, it’s the subtle ways you realise kindness and optimism doesn’t necessarily equate to naivety and foolishness, bumbling through life pretending everything is okay but slowly withering on the inside.

Ted Lasso himself even reflected on how he has always been underestimated, primarily because people think he’s a foolish country bumpkin who has no idea how to survive this dog-eat-dog world. One scene finds him in a hostile pub in a testy situation, quoting a phrase apparently said by Whitman: “Be curious, not judgmental.”

Unlike the wholesome comedy of Schitt’s Creek, The Good Place and BoJack Horseman, the kindness and wholesomeness aren’t reciprocated by other characters – in fact, quite the opposite. Nobody changed because they’re surrounded by a good environment. In fact, the environment changed because of a good person.

Fans of AFC Richmond routinely hurl abuse at Lasso throughout games, but eventually you can see the optimism start to spread through each character, each in their own little way.

I’ll be honest with you: Ted Lasso, for me, is a vibe and energy we all not necessarily want, but need. Sure, spouting lines from Hallmark cards about happiness will probably get you punched in the face. Sure, sometimes it’s better to not stand out in a crowd or dance like a loser while everyone’s watching. In fact, Ted – the definition of dad jokes – doesn’t help his own cause by saying things like, “I have a hard time hearing people who don’t believe in themselves!” or by bringing his spiteful boss cookies every morning. That is disgustingly nice!

Ted Lasso will remain deeply valuable into this year and beyond because it is also about a bunch of very different people who display fulfilling, conscientious confidence and leadership, none of that toxic BS we’ve accustomed ourselves to.

Nobody is wrestling in the mud while teammates jeer you and coaches hurl abuse at you, nobody is grabbing anyone by the pussy, nobody is being slated for poor performances or not showing up. Instead, it’s through cultivating an environment of growth, respect, friendship, camaraderie and everything in between instils long-term success and true meaning (not to go all psychologist on you!).

Ted Lasso is undoubtedly not a manger for the Premier League. In fact, I don’t think he’d succeed in lower-tier coaching here in Ireland. But weaving through the 10 episodes, you realise what Ted Lasso and his crew of merry men are. Sometimes you need someone to put a socially distanced and washed arm around you and say “everything is going to be alright, we’ll go again tomorrow”.

I assure you the show isn’t too syrupy and sugar-coated to the point of over-optimism saturation – the end will testify to that. It’s full of incredible oneliners that upon reflection will get you thinking, not too much, but just enough that your brain feels jolted and you get some bit of perspective.

So, here’s the truth. I want to live a bit more like Ted Lasso, probably a failure measured off of Premier League points and various capitalism metrics, but a success based off of human emotions and functioning that you can’t possibly measure. Watching Ted move through life, and every day, inspiring and requiring himself to be better, to do better along with those around him, was just what the doctor ordered.