Actions were pure human malice, a volcano of rage that was accumulating for years 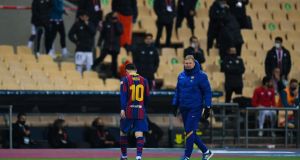 Exactly 90 seconds before the act of violence that will earn Lionel Messi his first red card for Barcelona, he’s standing just inside the halfway line, waiting to receive a pass.

He’s seen a gap. The sort of gap Messi has seen thousands of times before.

And most of the time we know what happens: a little burst of speed, and in an instant he’s 15 yards farther up the field, the ball still magically glued to his feet. But here, the gap closes around him. Iker Muniain wins the ball with a slide tackle. And as Athletic Bilbao move it unhurriedly up the field, Messi’s arms drop sadly to his sides.

Moments later, Messi feels the crunching shoulder of Asier Villalibre smack the side of his head as he plays a pass. Messi sprints towards the area.

Villalibre impedes his path. And so Messi swings an arm at the back of his head: the act of a desperate man, a hopeless man. The sheer illogic of it seems to drain Messi entirely. He leans over to see if Villalibre is okay. He accepts his red card without complaint. As he leaves the field, he hands the captain’s armband to Jordi Alba.

The first thing to say about Messi’s first red card in 753 Barcelona first-team games is that it probably shouldn’t have been. After all, this is hardly the first time Messi has lost his temper on the pitch. Nor should this be entirely surprising. Messi has been getting kicked, clipped, blocked, barged, tugged, tripped and tag-teamed ever since he learned to dribble a football. Indeed, Messi has played a large part of his career against a backdrop of people specifically trying to make him angry.

Most of the time, Messi anger is quite amusing. There are the numerous tiffs with Sergio Ramos and Pepe from clasicos past, a duelling-stags clash with João Félix at last year’s Supercopa, the time he chided a third-tier defender in a pre-season friendly with the words: “Do you want to stop kicking me, assh**e?” The time he celebrated a last-minute penalty against Valencia by running over to their fans and screaming: “La concha de sus madres! Hijos de puta!” Such grace! Such elegance! And yet even in this context there was something singular and shocking about the haymaker Messi threw on Sunday night.

Confrontation, handbags, the heat of battle: these are the common and established tropes of footballing anger. But Messi isn’t trying to win the ball. He isn’t reacting to a studs-up tackle or challenging a refereeing decision or defending a team-mate’s honour. In a sense, this isn’t a footballing act at all. It’s pure human malice, a volcano of rage and vindictiveness that has probably been accumulating for years.

Perhaps the closest parallel is Zinedine Zidane’s headbutt in the 2006 World Cup final: an act triggered by Marco Materazzi’s insult but fuelled by a toxic brew of circumstances: the state of the game, the size of the occasion, the gilt-edged chance that he had put straight at Gigi Buffon just a few minutes earlier. And above all, that sense of desolation and loss, of a curtain coming down, of a game that could no longer be bent to his will.

From a young age, Messi never encountered a problem that he couldn’t solve with his feet. Control the ball and everything else – the defenders, the goalkeeper, the game, the power – simply falls into line. But now, although his skill with a ball remains peerless, it no longer holds the world in its orbit. Barcelona, the club he loved, has fallen into decay. His friends have left or been sold. His transfer request was turned down in the summer.

And so, as Muniain wins the ball, Messi surveys the scene. He sees Trincão to one side of him. Martin Braithwaite ahead of him. He can’t win the trophies he craves, he can’t keep the players he likes or sign the players he wants. He can’t control his own future. His hamstring hurts, he’s been fouled all night, Atlético Madrid are seven points ahead in La Liga, and now another piece of silverware is slipping away. At this point, he feels a shoulder smack the side of his face. And he snaps.

“I can understand what Messi did,” his manager, Ronald Koeman, said afterwards. “It’s normal to react when they keep trying to foul you.” But if Koeman was trying to stick up for his player, to uphold his impeccable aura, then in a strange way it had the opposite effect. For the power of Messi has always rested on the fact that you couldn’t understand what he was doing. That he wasn’t normal. That the usual rules of cause and effect didn’t apply.

This is the flimsy basis upon which an entire sporting belief system has been built: Messi as deity, Messi as light, Messi as saviour and transcendence. All fun. All fine. All essentially fulfilling the fundamentally human need for sport to make us feel something, to build us a world, to show us power. Or as the Catalan writer Jordi Puntí puts it: “An alternative world lives in our imagination, and Messi nourishes it.”

But the problem with creating human deities is how you deal with the waning of their power, the dimming of their light – how you process the cruelty and suffering that occur under their command. Perhaps you explain it away as the act of a vengeful and angry God, and carry on with your day. Or perhaps, by contrast, you conclude that he simply doesn’t exist.