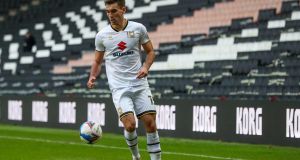 Milton Keynes Dons Warren O’Hora during the first half of the Sky Bet League One match between MK Dons and Hull City at Stadium MK. Photo: John Cripps/MI News/NurPhoto via Getty Images

MK Dons have confirmed the long-term signing of former Bohemians defender Warren O’Hora who had been on loan at the League One side from Brighton.

The 21-year-old moved to the club for the season back in August and has since made 17 appearances. Having been impressed with the underage international’s form, manager Russell Martin has moved to secure him for the long term after the club accepted a bid for former Ireland international Richard Keogh from a Championship side.

The manager, however, suggests that O’Hora will move on what will, initially at least, be a free, something that would be a blow to Bohemians who would have been entitled to a percentage of any fee.

“He’s been here all weekend without food or water,” joked Russell, “and he’s signed his contract this morning.

“Brighton have been great because they see that Warren has done really well, he wants to kick on with his career and he wasn’t going to stay there so they’re been excellent. I don’t mind saying that we’ve not spent any money although there are things in there (in the contract) and stuff. I think it’s a great bit of business for us as a club, both short term and long term, and a good move for Warren.

“He’s been fantastic, one of our best players. He’s got real leadership qualities and now that he’s our player I’m really hoping to see them come through because when you’re a loan player it’s difficult. “The challenge for him now is to establish himself as a top player at this level.”

O’Hora, who joined Brighton in January 2018, said he was delighted to have committed his long-term future to the club. “I’m over the moon,” he told the club’s website. “I’ve enjoyed my time with the club ever since I arrived back in pre-season, so I’m happy to be here on a permanent basis.”

The move for O’Hora comes after MK Dons accepted an offer, widely reported to be from Huddersfield Town, for Keogh whose form this season has earned him a swift return to the Championship where he played until he was sacked by Derby County in October 2019, a month after he had been injured in a drink driving incident.

“We are losing a really good person and a really good player and it has hurt us,” said Martin. “But I’m not going to sit here and say that Richard’s been disloyal because you find out really quickly in football (what happens) when the boot is on the other foot. He found that out at Derby, there’s no doubt about that, with the way he was treated when he was dismissed.

“We put a lot of work into getting him fit and performing well again and that’s why he has attracted the attention. But he’s a really good person and he has done a good job for us in terms of driving the culture and on the pitch, especially recently.

“I’m disappointed by the situation but I understand Richard’s position....he sees it as his last chance to have a crack at that level and he wants to have another go at it.”