Richard Keogh has joined Huddersfield until the end of the season 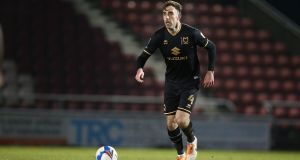 Richard Keogh has had an impressive spell at Milton Keynes Dons earning him a move back to the Championship. Photograph: Getty Images

More than a year after he was sacked by Derby County as a result of a drink driving incident in which he sustained a serious knee injury, Republic of Ireland international Richard Keogh has completed a move back to the Championship with the 34 year-old defender joining Huddersfield Town until the end of the season.

Keogh endured a year on the sidelines as he recovered from the knee problem sustained in the late night incident at Derby where the car he was a passenger in crashed. But he made a successful return to playing at League One side MK Dons, starting 21 games in all competitions since September and impressing with his form.

The performances have earned him the move back to Huddersfield Town where he spent a short time on loan back in 2007. He comes in on a short term contract at a time when the club has been struggling to cope with a number of injuries to defenders with Richard Stearman, Christopher Schindler and Tommy Elphick all ruled out in recent weeks but he will be hoping to prove his worth between now and the summer.

“We’ve suffered with an unusually high number of injures at centre back and Richard’s arrival adds depth to this position for the rest of the season,” said Huddersfield’s head of football operations, Leigh Bromby.

“He’s got incredible knowledge of this division and that should be a big help to the likes of Rarmani Edmonds-Green and Romoney Crichlow on the pitch.”

The club’s coach, Carlos Corberán, suggested that despite the manner in which his time at Derby ended - with Keogh the only one of several players involved to have been dismissed - he sees the defender as a reliable figure who can be expected to exert a positive influence over younger players.

“Richard is a player with an amazing background and a lot of experience in the Championship,” he said. “He has regularly played over 4,000 minutes per season at his previous clubs, and you need the combination of his experience alongside our young players to create a competitive team.

“The competitive character he has, and the respect he has for his job, and very important values within our group. He is a good defender and he can also help us to play out from the back. His ability to play on the left and right of central defence is something we need in the team too.”