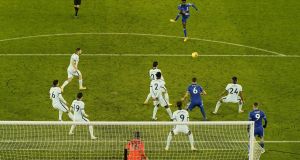 Leicester climbed to the top of the Premier League by skilfully exposing the shortcomings of Chelsea. Frank Lampard was hardly thankful for the lesson, as this latest defeat, his team’s fifth in their last eight league matches, gives ammunition to the critics who insist he is not the manager to fulfil Chelsea’s grand ambitions. Calls for him to be replaced will intensify.

Brendan Rodgers, meanwhile, can take pride in his team, who outwitted and outfought the visitors. Goals by Wilfred Ndidi and James Maddison earned a deserved win for the hosts.

While Leicester had the summit in their sights, Lampard went into this game having to explain why Chelsea were squatting so far below them. Roman Abramovich did not spend over £200 million to build a team of also-rans. Nor is he noted for his tolerance of patter about adaptation periods and teething problems.

Given that Chelsea have jilted managers of much better pedigree than Lampard, the Englishman needed to demonstrate that in spite of his lack of experience, he can guide this team upwards, and fast. The best way to indicate progress would be to beat high-ranked opponents, a feat Chelsea had yet to achieve in the league this season.

Lampard made four alterations to the line-up that started Saturday’s victory over Fulham, which ended a three-match losing streak on their travels. Tammy Abraham, without a goal since St Stephen’s Day, started up front, while Kai Havertz was given another opportunity to come to terms with the Premier League. Reece James returned at right back, with Callum Hudson-Odoi on the wing ahead of him.

Leicester, meanwhile, opted for consistency, Rodgers fielding the same side that proved to be too good for Southampton on Saturday.

They picked up where they left off, opening the scoring against a sluggish Chelsea after six minutes. The goal encapsulated Leicester’s superior sharpness and rhythm. Marc Albrighton played a short corner to James Maddison and then accepted the return pass before pulling the ball back to Harvey Barnes near the penalty spot.

Barnes, whose gorgeous cross had led to the corner, swished at the air, a mishit that turned into the perfect tee-up for Ndidi, who struck a superb left-footed shot in off the post from 20 yards. The Nigerian’s first goal of the season was a work of beauty. Things had just turned uglier for Lampard.

Worse almost followed in the 15th minute, when Maddison thrashed a shot past Édouard Mendy from even farther out. This time the ball struck the bar and continued on over. The chance had been created by Timothy Castagne after the Belgian cantered down the right wing, leaving Ben Chilwell and others in his wake. As a vignette of the better return that Leicester are getting from their recruits, that told a tale, even if Chilwell has generally delivered more than Chelsea’s other recent signings.

Chilwell began to make dangerous runs of his own as the first half progressed. But as a unit Chelsea’s attack sputtered, too many players flimsy or out of sync. Abraham struggled to hold on to the ball up top, while Havertz seemed out of his depth.

Leicester threatened from long range again when Albrighton let fly from 25 yards. Mendy pushed the swerving shot over the bar.

Yet Chelsea created a fine chance in the 32nd minute, when Christian Pulisic combined with Havertz before presenting Hudson-Odoi with a prime invitation to score. But the winger fired a shot into the sidenetting.

Then came an even more agonising series of events for Chelsea: first, they had a penalty in their favour overturned when, after reviewing the evidence, the referee decided that Jonny Evans’s fouled Pulisic just outside the box. Mason Mount botched the free-kick. Moments later Leicester made it 2-0 in damning fashion.

Albrighton clipped the ball from midfield over Chelsea’s ramshackle defence, Antonio Rüdiger bumped into Vardy and Maddison was left free to finish smartly from eight yards.

Surprisingly, Lampard did not call on any of his high-end substitutes at half-time. Leicester, content to counterattack, tore a gaping hole in their defence again in the 50th minute, but James Justin headed wide from Albrighton’s’ cross.

Five minutes later Maddison prised them apart again with an exquisite pass, but Leicester sabotaged their own brilliant move by straying offside. But soon the hosts picked their way forward again, Maddison conspiring artfully with Vardy before forcing a good save from Mendy.

With his team drifting to defeat, Lampard finally reached for a different plan in the 67th minute. On came Timo Werner and Hakim Ziyech for Hudson-Odoi and Havertz.

The new duo made little difference until five minutes from time, when Werner stabbed the ball into the net from a free-kick by Ziyech. To no avail, as the German was judged to have been fractionally offside. – Guardian