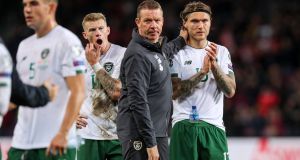 The FAI has confirmed that Alan Kelly is to finish in his role as Ireland goalkeeping coach, with the former international saying in a statement released late on Tuesday night that his decision was related to the ongoing Covid-19 pandemic.

“Alan called to inform me of his decision and I have accepted it,” said Kenny. “I want to thank him for his time as goalkeeper coach with me and for his overall contribution to Irish football.”

Kelly said: “With Covid-19 still viciously circulating in our communities, it is with a heavy heart that I have decided the time is right to step down from my role with the Republic of Ireland senior international team and pass on a fantastic group of goalkeepers to a new goalkeeping coach for the upcoming World Cup qualifying campaign.

“It has been an absolute honour and a privilege to represent the Republic of Ireland as a player and coach for the last 28 years. A special thank you goes out to all the Irish international goalkeepers I have played alongside and had the good fortune to coach.

“I would like to thank the FAI and wish Stephen, the staff and all the players the very best of luck in the World Cup qualifiers beginning in March and for the future.”

The news comes just four days after it was announced that Damien Duff had departed Kenny’s set-up.

Having made 34 appearances for Ireland as a player, Kelly stayed on as goalkeeping coach after Kenny succeeded Mick McCarthy in the manager’s job last year. He and the Dubliner are believed to have enjoyed a good personal relationship.

His position has been the subject of speculation, though, since the controversy over the motivational video shown to players and the speech by Kenny that followed it ahead of the England game in Wembley.

When an English newspaper claimed that some of the English-born players had been offended, the FAI announced an investigation. At the time, a number of Irish media reports hinted that Kelly might have taken umbrage too and reported the incident to the association.

That was subsequently denied by a senior Abbotstown official and, later, by Kenny who said on the evening of the World Cup draw that the 52-year-old “definitely did not” make any report or complaint.

In response to the speculation, Kelly separately issued an angry statement emphatically denying the leaking of the video story to the Daily Mail. He said he was “disgusted” by the “narrative and innuendo”. In fact, it never seemed to have been seriously believed by anyone that he had been responsible for the story leaking to the press.

Kelly was clearly deeply upset by the coverage but Kenny expressed confidence that he would continue on in the role. Others around the association were less sure with his decision not to travel back to Dublin for the Bulgaria game in Dublin at the end of the November window widely taken as evidence there was a problem.

The decision was explained, however, on the basis that Kelly has asthma and that he had decided to step away from a squad that had been hit by a succession of coronavirus-related issues for the good of his health. Kenny said at the time that he had no issue with that, with the manager describing Kelly as a “great servant” to the Irish game.

Clearly the situation with Covid-19 was unlikely to be drastically better in March in Ireland than it was in November. But his departure now, certainly its timing, comes as another blow to a manager who has sustained more than his fair share of them during his first six months in charge.

Former Dundalk goalkeeper Steve Williams stepped in to work with the Irish squad in November but a higher-profile ex-player seems a far more likely choice for the long-term role. Shay Given and Dean Kiely, currently working at Derby County and Crystal Palace respectively, are among the more obvious candidates given their history with the team, although both might be reluctant given the scale of their club commitments. Dan Connor, who worked with the under-21s when Kenny was in charge; Rene Gilmartin, who replaced him; and Nicky Colgan, who is currently working with Chris Hughton at Nottingham Forest, would all be possibilities.

Kenny, meanwhile, had already been considering who he might bring in to replace Duff, whose departure was confirmed last Friday. John O’Shea, currently with Reading but working part-time with the under-21s and Lee Carsley are both said to have been talked about, although the former Manchester United defender has a lot of other commitments at present and Carsley has a fairly high status coaching role with the English FA.

Duff’s timing remains a mystery, meanwhile, with the former Chelsea and Blackburn star opting to go some six weeks after the investigation that is said to have upset him so much. It is not clear, indeed, what else he would have felt the association could have done but follow up on reports that English-born players had been upset by events in London. Association officials spoke with members of management, including Duff – who is said to have been keen that the source of the leak be established – and players and it was then made clear that there was no case to answer.

Independent board chair Roy Barrett did, however, suggest after the recent FAI agm that there had been something of an overreaction to the situation on the part of the association.

The general sense seems to be that the leak to the media was through a connection to a player who had not intended for the content of the video or Kenny’s speech to the squad to become public at all.