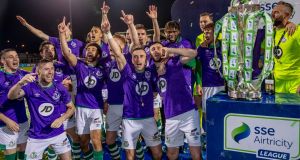 The FAI has confirmed that SSE Airtricity has extended its title sponsorship of the League of Ireland. There had been a general expectation in recent weeks that the company would stay on but the deal announced on Wednesday is for two years rather than just one and also takes in the women’s national league.

The deal comes after recently appointed FAI chief executive Jonathan Hill had made it clear that he felt the association’s best hope of filling out the gaps in its commercial roster just now lay in renewals rather than the establishment of new deals.

The league deal is much smaller than the one for main association sponsor with Airtricity’s backing previously worth around €340,000 per annum compared with the €8.9 million over four years that the FAI received from Three when it last committed for the long term.

The telecommunications firm extended by a year for 2020 but after a decade of high profile involvement with Irish football it was reported that they have made a strategic shift towards marketing through live music. No replacement has so far signed up.

The terms of SSE Airtricity’s new deal have not yet become public and so it is not yet known what impact coronavirus has had on the money involved or what value has been placed on the women’s league.

Republic of Ireland international, Aine O’Gorman, who plays for league and cup double winners Peamount, hailed the significance of the deal on social media after it was announced.

The inclusion of the men’s league in global FAI deals previously turned out to be problematic during John Delaney’s time at the organisation with a constant battle fought by clubs behind the scenes to achieve what they regarded as a fair division of funds.

The amount of money, meanwhile, is relatively minor in the context of the challenges clubs are facing due to the pandemic with men’s sides estimating that in the absence of crowds and related matchday income, they could need anything up to €9 million in government funding to get through a full campaign.

There seems to be a more widespread feeling that at least half that amount would be required.

Nevertheless, the deal is good news for the club game at a difficult time: “We are delighted that not only will SSE Airtricity continue as title sponsor for the League of Ireland for a 12th season but they have also extended their sponsorship deal to include the Women’s National League,” said Hill as the deal was announced.

“The double sponsorship announcement today is testament to the future direction of our domestic game and a significant boost for our League football infrastructure.”

Airtricity’s managing director, Klair Neenan, said that the company was “delighted,” not just to maintain the relationship but to extend it.

“SSE Airtricity’s commitment to the Women’s National League is demonstrative of the growing interest in the women’s game in Ireland,” she said. “Our commitment comes at a crucial time in its development. Football clubs sit at the heart of their communities and by working closely with the FAI we believe this partnership can be a key to increasing participation, development and the wider visibility of the women’s game in Ireland.”