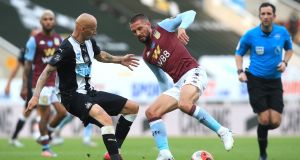 Ireland international midfielder Conor Hourihane is to go on loan from Aston Villa to Swansea until the end of the season. Photograph: Lindsey Parnaby/Pool via Getty Images

Conor Hourihane is set to be unveiled by Swansea after the Irish midfielder and the two clubs agreed terms for a loan until the end of the season with the Championship side.

Aston Villa manager Dean Smith said that he envisages the Corkman returning to the top-flight club in the summer and that he remains a part of his plans. But he admitted that the 29-year-old, who has only featured in four Premier League games so far in the current campaign, had been keen to get away in order to play more football.

“Conor has been to see me a number of times because he wants to be playing football games,” said the manager before news of the Swansea move became public.

“First and foremost I don’t want Conor to go anywhere on loan but Conor has asked if he can go out and get games. So we have said as a football club we will look at it, he will look at it as well if there is a viable option for both the club and Conor we would probably allow him to go out on loan and play games.

“But it would be reluctant because I like Conor as a person, as a player but I understand his frustrations at not playing. He’s never happy when he’s not playing games and he’s intimated to me that he wants to go out and play games. It would be a loan to the end of the season to get him back playing and get him back to us.”

Hourihane has played around 150 times for Villa since joining the club in January 2017 and was a key figure in their successful push for promotion from the Championship in 2018/19. He continued to feature regularly during the club’s first season at the higher level but has found game time much harder this time around.

Swansea are themselves chasing a return to the Premier League and currently sit in second place, four points behind Norwich City. The club recently tried to sign Michael Obafemi from Southampton on loan but that move fell through when the striker injured himself in training days before he was expected to join the Welsh side.