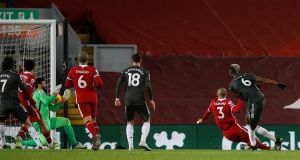 Manchester United remain on top of the Premier League table, with a three-point advantage over Liverpool, as the season approaches its halfway stage. It is a state of affairs that would have felt utterly ludicrous as recently as early October, when they were losing 6-1 at home to Tottenham, and even now will cause a few eyebrows to travel skywards.

Ole Gunnar Solskjær, the manager, admitted during the week that his team had “not really set the world alight too many times.” They continued the trend at Anfield, wanting primarily to be difficult to beat, and yet they will reflect upon having not one but two glorious opportunities to secure a smash-and-grab victory over their fiercest rivals.

The chances came late on, after United had absorbed what Liverpool could throw at them with an increasing measure of comfort, and the defending champions could be indebted to Alisson, who saved both of them. On the first, he stuck out a leg to deny Bruno Fernandes, who had shot form the edge of the six-yard box and on the second, he stood tall to deny Paul Pogba, after Aaron Wan-Bissaka’s cross had broken kindly. Pogba beat the ground in frustration. He knew that he had blown the chance to ignite an unlikely title push for his club.

Liverpool controlled the game for long spells. They played plenty of it inside the United half and the bossed the shot count. But for them, it was quantity over quality in terms of chances and their wobble goes on. While United’s numbers are impressive – 10 wins and four draws from 15 games – Liverpool have taken just 14 points from nine matches and it is now three draws and a defeat in four.

For the third game in a row, they drew a blank in front of goal and Jürgen Klopp’s 200th Premier League game would not be one to witness a reinvigoration of the collective belief.

It was the biggest match of the season and the first time in at least 10 years that English’s football classic fixture was of relevance to the title race. United had gone top last Tuesday with the win at Burnley – the first time they had looked down on the rest after as many as 17 games since 2012-13, the club’s last title-winning season – and Solskjaer said beforehand that he wanted his team to go for it, to exploit Liverpool’s lack of established centre-backs.

Joël Matip was still not fit – together with the long-term casualties Virgil van Dijk and Joe Gomez – and so Klopp had stuck with Jordan Henderson alongside Fabinho at the heart of the back four. It felt a little incongruous but needs must and Liverpool’s idea was to keep the ball and dictate the tempo, thus protecting their defence.

Could United get at them? It was certainly a positive move from Solskjær to start with two central defenders rather than three and the system asked Pogba and Anthony Martial to work in the wide midfield areas. But United’s best attacking bets would still be on the counter, looking for quick passes up the channels. Whenever a Liverpool move broke down, they were alive to the possibility of rushing men forward although the final pass or dribble was often poor.

A snap-shot of the first-half came midway through it when Pogba tried to ignite a United break only to underhit the long diagonal allowing Trent Alexander-Arnold to intercept and hit one of his own for Sadio Mané, who played it inside to Roberto Firmino. When the centre-forward cut inside, he opened the chance of a curler into the far corner only for Victor Lindelof – surprisingly preferred to Eric Bailly – to stay tight and block.

Liverpool had the bulk of the chances in the first half, without creating a truly big one. Firmino had the best two. First, he sliced when reasonably placed after Xherdan Shaqiri had found Mané while on 34 minutes, after a Mohamed Salah had been stopped inside the area, Firmino could not get hold of his shot on the breaking ball.

Klopp simmered with frustration and when Mané was released over the top in stoppage time only for Paul Tierney to blow for half-time, seemingly a few seconds early, the manager applauded him with no little sarcasm. For United, the first-half pickings were altogether slimmer, their only effort on goal being a 33rd minute Fernandes free-kick that fizzed just wide.

Liverpool tried to build through Thiago and they hogged the ball but United were happy enough with the arrangement, just as long as their opponents remained in front of them. The priority for Solskjær’s team became maintaining their defensive shape and tracking Liverpool’s runners, of keeping their concentration levels at the maximum.

Liverpool flickered at the start of the second half but nothing more than that. Harry Maguire denied Firmino at the far post after an Andy Robertson cross while a gaggle of United defenders crowded out Salah inside the area. He did belatedly get his shot off only for it to deflect wide.

United appeared to want to get to the midway point of the second period on level terms and then judge whether to push. They reasoned that they might need only one chance. As it was, they created two. Alisson would be the Liverpool hero. – Guardian