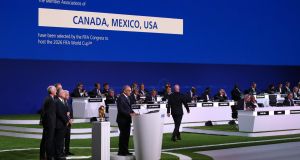 US football association president Carlos Cordeiro addresses the 68th Fifa Congress after the announcement of the host for the 2026 World Cup. Photograph: Catherine Ivill/Getty

Fifa’s decision to award the united bid from the USA, Canada and Mexico the right to host the 2026 World Cup will bring us a 48-team tournament like no World Cup before. But how will it work?

How does having three host nations work?

23 cities across the three countries are bidding to be selected as one of the 16 eventual host cities. Mexico and Canada are expected to host 10 matches each, using three stadiums, with the US hosting the remaining 60 games in 10 stadiums.

Mexico and Canada would each host seven group matches, two matches in the round of 32, and one match in the round of 16. Every game from the quarter-final stage onwards would be in the US, with the MetLife Stadium in New York expected to stage the final itself.

The bid document suggests that the opening day of the tournament could consist of three matches – one taking place in each country, and featuring the relevant host nation.

One strength of the joint bid is that every city wanting to take part has stadiums that are already built and operating, with an average capacity greater than 68,000, and with guaranteed continued use after the tournament. Morocco’s defeated bid, by comparison, involved the risky proposition of building nine new stadiums.

The 48 teams will be divided into 16 groups of three. The top two teams in each group will progress to a new knock-out phase of 32. It means that 16 teams will go home after playing just two matches, and critics have argued that a format featuring groups comprised of three teams is likely to be very unbalanced.

There is also, some say, a significant disadvantage to being the team that does not feature in the opening group game. 16 countries will start their campaigns against a team who have already played. If that team won their opening game they will know they only need a point to progress. If they lost it, they know they need a win to stand any chance of avoiding elimination. Both suggest a very different approach to a game where both teams start on zero points.

Supporters of expansion say the strength of the format is that while it adds 16 extra teams, it adds only 16 extra matches, and barely impacts the number of days it takes to play the tournament. The two teams who reach the final will have still played six matches to get there, as they currently do. In effect, 32 teams are still guaranteed to have at least three matches in the competition, which is what happens in the current 32 team format.

The expansion to 48 teams has been a key plank of Gianni Infantino’s policy at Fifa. It expands the number of places at the finals available to teams of every confederation, including guaranteeing that a team from Oceania will always make the cut. The new allocation of spaces is:

In addition there will be two final spots available from a new World Cup play-off mini-tournament.

The proposal is that a nation from every confederation, except Uefa, will play-off in a knockout tournament that doubles up as a test event for the host nation. The five teams will be joined by an additional country from the host nations’ confederation – Concacaf. Two seeded teams will each meet the winners of a match between two unseeded teams to determine the final places.

It is currently unclear where this leaves the Confederations Cup tournament – normally held the summer before a World Cup as the test event for the host nation. The 2021 Confederations Cup is yet to have been assigned a host, as it is not practical to play it in Qatar’s climate in the summer of 2021.

Manchester United fans accused of making homophobic chants 09:04
Diego Simeone raises the roof with sideline spectacle 08:28
Jurgen Klopp: ‘welcome to Anfield, it’s not over yet’ 07:55
Liverpool frustrated and beaten in first leg in Madrid; Ireland to reveal XV for England 07:30
Seán Moran: GAA in trouble if sectional interests not accountable to rules 07:00

1 Gordon D’Arcy: Digging deep only recipe for Twickenham success
2 Robbie Henshaw and Bundee Aki to lead from the centre
3 Jurgen Klopp: ‘welcome to Anfield, it’s not over yet’
4 Kieran Donaghy calls for GAA to shut down fans’ forums
5 Seán Moran: GAA in trouble if sectional interests not accountable to rules
Real news has value SUBSCRIBE
Crossword Get access to over 6,000 interactive crosswords