From Russia with Love: A long and winding road 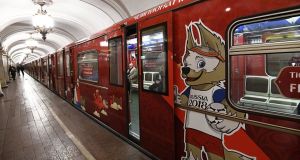 The Daily Mail reporter tasked with working out how far every single one of the 32 nations in the World Cup will have to travel within Russia during the group stage of the competition. If he didn’t get a pay rise after completing his mission, he should go on hunger strike.

Egypt, for your information, will have to travel the greatest distance, a meaty 5,679 miles, while Colombia have only to cover 748 miles. Meanwhile, if England are to win the World Cup, they’ll have 9,389 miles on the clock by the time Harry Kane raises the trophy. Stop giggling at the back.

“Salah’s game doesn’t worry me. How do you stop him? Well, you can do what Sergio Ramos did. He showed us one way of stopping him and I can’t say that I was upset when I watched him get injured in the final.” - Should Mo Salah come up against Russian defender Ilya Kutepov next Tuesday, our thoughts will be very much with him.

“I’m really worried about these Tottenham players, I don’t think they know how to win.” - Tony Adams, wearing his Arsenal baseball cap, concerned about the number of non-winning Spurs players in the England squad.

“I called him into the office and said: “Gareth, I think you’re too bright to do this job. I think you have to make a choice. If it was my choice, I think you should become a travel agent.” - Former Crystal Palace youth team manager Alan Smith recalling the advice he gave to Southgate when he was a young fella.

“All the best players are there. Zlatan is not there, so . . . he should be there, but he’s not there.” Zlatan Ibrahimovic? Hush.

trapped in a stadium toilet in moscow beating on door but nobody comes to rescue me send help pic.twitter.com/AQjBoEhQcb

“I don’t tip England because it is always the same problem with England. They are not strong enough in the head.” William Gallas. Harsh.

“This never-ending 1966, the returning ghost, something with its white tentacles . . . the other teams get on with it and win. They don’t come up with these excuses. They’re losers’ excuses.” - Fabio Capello, sounding like a man who doesn’t reminisce all that fondly about his days as England gaffer.

Hero of the Hour

That would be Toronto Star journalist Joe Callaghan who very fortunately happened to be in the same Moscow stadium as Ken Early when he spotted his tweet about being trapped in a toilet. So, Joe heroically freed him. And he’s announced that the first instalment of his World Cup blog, ‘The View From The Other Side of The Toilet Door’, will feature the Irish Times/Second Captains man.

Ken’s World Cup, then, has started as encouragingly as Spain’s.

ESPN shared a story the other day about a group of Canada-based Italians who took out a full-page ad in a Swedish newspaper to share their annoyance with the Swedes for denying Italy a place in the World Cup. All you could conclude, really, is that these people must have considerably more money than sense.

“You have robbed us of the joy of singing ‘Forza Azzuri’ and cheering on our own. Know that all our bitterness against you will be expressed in cheers for South Korea, Mexico and Germany - your opponents in the first round - because after those matches we’re sure you won’t be in the race anyway. This is nothing against you . . . actually, the fact is . . . it’s all against you!”

We checked to see how much it would cost to take out an ad in Denmark’s Ekstra Bladet, but it was prohibitive. So, we’ll just have too silently seethe at Christian Eriksen and Co for however long their World Cup lasts.

June 2018: The Daily Mirror picks Youssef Msakni out as Tunisia’s star man when they profiled England’s group opponents, describing the forward as “a gifted player with great skill, dribbling ability and the ability to shoot from distance, he’s been linked with moves to Arsenal, Everton and Tottenham”.

April 2018: “Sadly this injury has denied me a chance to play in the World Cup,” writes Msakni on Instagram after a cruciate ligament injury he picked up while playing for his club in Qatar ruled him out of action for six months.

There but for the grace of a higher power go all of us, especially those still tipping Alex Oxlade-Chamberlain to be the player of the tournament. A good chance he has too.

That’s how many billions (in Euros) the United States, Canada and Mexico promised Fifa they would generate if they were awarded the hosting rights to the 2026 World Cup, compared to Morocco’s pledge of five billion. You could have knocked us over with a feather when US/Can/Mex won.

1 Reality Bites – Tales from the new normal: Caitríona Cormican
2 Nicholas Quinn: ‘Swimming became how I dealt with grief’
3 A beautiful, happy accident - Moneyball is the best sports movie ever
4 James McClean still failing to learn his own online history lesson
5 Ian McKinley: ‘You do take for granted the simple things in life’
Real news has value SUBSCRIBE
Crossword Get access to over 6,000 interactive crosswords