Uncapped, unemployed rightback was king of Mexico before careering off the rails 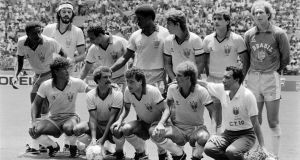 Josimar (back left) and his Brazil teammates ahead of their 1986 World Cup quater-final against France. Photograph: Stringer/AFP/Getty

In the summer of 1964, England took part in the Little World Cup in Brazil. It was a simple four-team league involving Portugal, Argentina and the hosts. England finished joint-bottom with Portugal. In their first match they were plugged 5-1 by Brazil in Rio. They commiserated with a night on the town, and were staggering around Copacabana beach the following morning when they were challenged to a game by some local kids.

It was an embarrassing mismatch: the England team, two years away from winning the Big World Cup, got absolutely slaughtered for the third time in 18 hours. Admittedly it was 12 v seven, and the seven had quaffed a few performance-diminishing substances the night before. But the story, told in Jimmy Greaves’s Don’t Shoot the Manager, reflects an eternal truth about Brazilian football: that there are brilliant, natural talents on every beach corner.

The ultimate symbol of that is Josimar, the two-hit wonder of Mexico 86. No World Cup has ever produced a better collection of goals – if you do only one thing with your lunch break today – and Josimar scored two monsters against Northern Ireland and Poland. He might as well have come straight out of the thin Mexican air. Nobody outside Brazil had heard of him; he wasn’t even in the Panini album.

He wasn’t just unknown – he was also uncapped and unemployed when he was called up to the Brazil squad at the last minute after the first-choice right-back Leandro pulled out. Four players missed a curfew but only one, the playboy winger Renato Gaúcho, was thrown out of the squad by the manager Telê Santana. Leandro, whose head was a mess at the time, pulled out in a kind of guilty solidarity.

Josimar had not played a game since mid-March, when his Botafogo contract expired. He was cooking and looking after his pregnant wife when he received a call telling him he was going to Mexico. In the best traditions, he thought it was a joke, politely said thank you and got on with his day. An hour later he received another call telling him where and when to report.

Édson Boaro, the back-up for Leandro who was now first choice, got injured after 10 minutes of the second match against Algeria. Josimar was not on the bench but he did replace Edson in the starting line-up against Northern Ireland six days later. He was strikingly tall for a full-back and formidably built, with a sinewy frame and thighs made of oak.

Brazil were 1-0 up with four minutes to go to half-time, keeping the ball with some lazy passing in Northern Ireland’s half. “Josimar … Júnior … Elzo … Alemao,” said BBC commentator John Motson, capturing the rhythmic groove of Brazil’s possession as Alemão played the ball square to Josimar. “Well, Careca and Casagrande are waiting for a cross.”

They’re still waiting. Josimar pushed the ball in front of him, sprinted on the spot in excitement at what he was about to attempt, and put his whole being into a shot. It was a ridiculous distance from which to shoot - 30 yards out and a long way to the right of centre – but the ball swooshed wickedly and arrowed past Pat Jennings into the far top corner.

The celebration was almost as iconic as the goal. Josimar went off on a mini lap of honour, both arms raised in the air, his face a picture of giddy disbelief. Years later, Jennings was asked by a small boy at a Q&A what it was like to be chipped by Josimar from 35 yards. “Son,” he said. “Your idea of a chip and my idea of a chip are two different things!”

For a full-back, a goal like that is a once-in-a-lifetime moment. So Josimar did it again four days later, rampaging through the Poland defence to batter the ball home from an absurd angle. It was the second goal in a 4-0 win that took Brazil into the quarter-finals, where they lost to France on penalties after a classic 1-1 draw.

Even though he only played three games, Josimar was included in Fifa’s team of the tournament, the only Brazilian apart from the centre-back Júlio César to make the XI. Botafogo re-signed him, and the media adopted him. “UM HERÓI DESEMPREGADO” (THE UNEMPLOYED HERO) was the headline of a feature in Placar. He also won an informal award as the most beautiful player of the tournament. “I’m just like coffee,” he said. “The ‘blackie’ that satisfies everyone.”

The fairytale soon became a cautionary tale. Josimar, like so many Brazilian footballers from poor backgrounds, was allergic to overnight fame. His life was tipped downside up and he surrendered to a hat-trick of vices: booze (especially whisky), cocaine and womanising.

Josimar was one of the first bad boys of Brazilian football, a status that rankled. “Maradona and Edmundo were given second chances,” he said in a 1995 interview. “Why not me? Nobody ever proved anything against me. I only liked a bit of whisky.”

Many sportsmen never recover from their lowest point; Josimar never really got over the high of Mexico and his career drifted to nothing. In 1988 he almost went to Dundee United (the mind boggles at the thought of the relationship between Josimar and Jim McLean) and he was offered to Alex Ferguson at Manchester United (the mind boggles, etc) before having a shambolic spell at Sevilla. He did play a significant part in Botafogo’s legendary Campeonato Carioca victory in 1989, and was a bit-part player in Brazil’s victorious Copa América squad a month later. He won the last of his 16 caps in November 1989. Those two goals in Mexico were the only ones he scored for Brazil.

Josimar eventually found his way back on the rails with the help of the great right-back Jorginho. He embraced Christianity and now lives in the north of Brazil. He is still bitter about all the racism, the fake friends and his treatment in the press. His recent interviews suggest the internal tug-of-war between denial and regret is unresolved.

He is more fondly remembered abroad than in Brazil, where he is a curiosity in the national team’s lavish history. The rest of the world only really saw Josimar at Mexico 86 and then in the greatest theatre of all, the imagination. We assumed he was roofing 30-yarders every week. If the World Cup is our dream holiday, once every four years, then Josimar was a helluva of a holiday romance.

Globalisation, the internet and Football Manager have long since stripped football of its mystery. Josimar is a joyful lament for the past. His name – and what a name, by the way – evokes the innocence of ignorance, before the internet bred know-it-alls in more ways than one.

There was a mythical quality to Josimar’s goals. You would see them once in a blue moon – on a grainy home-made VHS that you had lovingly labelled ‘DON’T TAPE OVER’, perhaps, or if Grandstand had a feature on great long-range goals. YouTube has changed our memories of our memories, and probably softened some of the Proustian magic of his goals. But his association is as powerful as ever.

Norway’s best football magazine is called Josimar; there’s even a Scottish graphic designer who named his business after his Brazilian muse. Along with Salvatore Schillaci at Italia 90, Josimar is surely football’s greatest one-tournament wonder.

He is also often included in the list of lost talents. If anything he was the opposite, a good but not great player whose brief career peak was perfectly in sync with the apex of football’s four-year cycle. Brazil has millions of talented unknowns, sure – but few left a mark on the football world like Josimar.

With thanks to Eduardo Pagnoncelli and David Tryhorn.