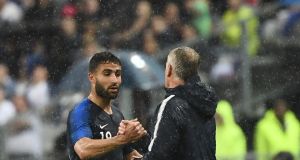 Liverpool are set to complete the signing of Nabil Fekir on Friday after meeting Lyon’s €60m valuation of the France international.

Fekir is on the verge of becoming Jürgen Klopp’s second major transfer of the summer, with Anfield officials having agreed a deal worth an initial €55m to the French club plus €5m in bonuses. The Lyon captain has informed his boyhood club of his preference for Anfield and the deal is expected to be finalised before the 24-year-old heads to the World Cup.

Jean-Michel Aulas, the Lyon president, told his club’s website on Thursday that the deal was “at a standstill” and unlikely to be concluded before the World Cup. Liverpool, however, continued to press ahead with negotiations and appear to have broken Aulas’s resolve to keep the attacking midfielder until after the World Cup in the hope of starting an auction.

Fekir is due to undergo a Liverpool medical at Clairefontaine, the France national team’s training base, before signing terms on Friday. Didier Deschamps’ side play their final World Cup warm-up game against the USA in Lyon on Saturday and the manager had instructed his squad to settle any outstanding transfer business before flying to Russia.

Liverpool have already signed the defensive midfielder Fabinho from Monaco for €49.7m and Naby Keita will arrive from Red Bull Leipzig this summer for €60m. They have also registered interest in Xherdan Shaqiri, who is available for €13.5m-€15.3m after Stoke City’s relegation from the Premier League.

“The deal is at a standstill, there is no way forward,” Aulas had claimed. “The deal will certainly not be closed during the World Cup and I don’t think there will be any change before the World Cup. We haven’t set a price tag because we haven’t discussed this [Fekir’s transfer] yet.”

Bayern Munich and Atlético Madrid have also been linked with Fekir, who can operate in a number of forward roles and would in effect be Philippe Coutinho’s replacement at Anfield. But his determination to join Klopp’s team and Liverpool’s willingness to go to €60m appears to have altered the stance of the Lyon president. – Guardian service