Southgate stands by decision to drop Sterling for Montenegro match

England manager admits forward is upset with him, but insists he made the right call 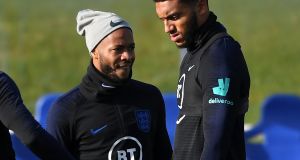 Joe Gomez and Raheem Sterling attend England training on Wednesday. The pair clashed when Liverpool defeated Manchester City in the Premier League on Sunday, and again on Monday when they reported for international duty. Photograph: Michael Regan/Getty Images

Gareth Southgate has confirmed that Raheem Sterling will return to the team when England visit Kosovo on Sunday, and has admitted the forward will be upset with him after being dropped for the Euro 2020 qualifier against Montenegro at Wembley on Thursday night.

While Southgate is keen to move on after Sterling’s altercation with Liverpool’s Joe Gomez in the canteen at St George’s Park on Monday, he has found himself in an awkward position after deciding one of his most important players will not be involved in England’s 1,000th fixture. It is understood that Sterling and others in the squad feel England’s manager overreacted after an incident which left Gomez with a cut under his right eye.

However, Southgate, whose side can secure their place at the finals tournament next summer with a draw against Montenegro, is adamant he has made the right call and does not fear any long-term repercussions. He has been impressed with Sterling’s reaction in training and expects the 24-year-old, who has eight goals and five assists in this qualifying campaign, to regain his place in the starting XI against Kosovo.

“We take the decision and drew a line under everything,” Southgate said. “We move forward now, the way he’s trained has been exemplary, so that’s it. Without knowing what might happen in tomorrow’s game and everything else, I can see that being the case.”

Southgate, though, was realistic when he was asked if Sterling is upset with him at the moment. “I wouldn’t imagine that he’s hugely enthusiastic. But I can understand that and in the end he’s with the group. He’s a massive part of what we do. He’s with us for the game tomorrow, he’s back with the team on the training pitch enjoying his football. He trained superbly well, as he always does. The thing is finished.”

Sterling and Gomez clashed when Liverpool defeated City in the Premier League on Sunday, and the ill feeling was lingering when they reported for international duty, with the resulting furore threatening to overshadow a proud occasion for England. Southgate, who insisted he is not concerned about club cliques forming, said the pair have made up.

Southgate is yet to decide whether Sterling will be sitting on the bench or in the stands on Thursday evening. But he expects him to take in pre-match ceremonies involving former captains, players with at least 50 caps and surviving members from the squad who won the 1966 World Cup.

Sterling’s absence during the match, however, creates a hole in England’s front three, with Chelsea’s Callum Hudson-Odoi and Borussia Dortmund’s Jadon Sancho vying to join Marcus Rashford and Harry Kane up front. There are also issues in midfield with Jordan Henderson and Ross Barkley suspended, and Fabian Delph another absentee. Harry Winks, Mason Mount and Declan Rice could form an inexperienced trio in the middle. John Stones is expected to partner Harry Maguire in central defence.

Southgate, who would not be drawn on whether he would drop a player for a knockout game, batted back suggestions that taking a tough stance with Sterling will eradicate the possibility of him having to discipline players in the future. “I think with any team, anything can happen at any given time. We’re talking about human beings, not robots, not machinery. I’m not arrogant enough or complacent enough to think that we might not have issues to deal with later this week, in some form or another, or in the future.”

I hope that all of my players know that I care about them, that I want to be fair with them

Former players have criticised Southgate’s reaction, but he said: “As a player my relationship with my managers and how I felt about them changed day to day, and there were occasions when I had the hump with them – usually when I wasn’t in the team.

“I hope that all of my players know that I care about them, that I want to be fair with them, that I want to do what’s right for all of them, and that they can lean on me when they need me. And I also accept that at times they’re not going to be bouncing with joy when they see my face walking through the meal room. That is part and parcel of being a manager.”