Clark happy to take comeback one game at a time 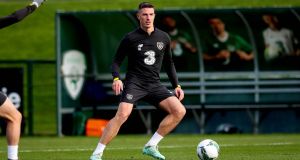 Ciaran Clark admits he came close to seeking a move away from Newcastle during the summer. Photograph: Ryan Byrne/Inpho

Having successfully come in from the cold at club level over the past few weeks, Ciaran Clark will take what he hopes are the first tentative steps towards reclaiming his starting spot with Ireland this evening.

The loyalty Mick McCarthy tends to show towards those who have served him well suggests that however well the 30-year-old might play against New Zealand, he may have to be patient if he wants to make further progress. Happily for him, he has learned all about that at Newcastle.

The central defender admits he came close to seeking a move away during the summer. First team opportunities had completely dried up towards the end of Rafa Benitez’s time there and Steve Bruce’s late arrival in the summer left little time to get a sense of where he would stand under the new manager and so he had to settle for as assurance that they could assess things ahead of the January window.

The early indications weren’t great with the new boss giving him just one game, in the League Cup, before the end of August but Bruce’s own prospects began to look bleak as the team took two points from the four matches that followed and Clark’s return for the defeat of Manchester United has marked a turning point for all concerned.

“In the back of your mind,” he admits, “there is a thought that you won’t get a chance but in the end I think it was just a case of him wanting to change it up a little bit. I think when things are going like that, there is always that chance that you might get back in there. I know it was after Leicester, the 5-0, a bad result, that he wanted to change things up. He made the couple of changes and that was me back in.”

Clark has certainly seized his opportunity, contributing to what have been tighter defensive displays and, more remarkably, chipping in with important goals in each of his last two appearances.

“We’ve done set-pieces leading up to the games and he puts us into positions where he thinks we can go and win the ball or the second ball, and it seems to be working. I think with the some of the results going our way now, it’s slowly turning them around.”

When things weren’t going so well with Newcastle, he admits he feared that he might not get another chance with Ireland and it was one of the reasons he considered pushing for a transfer. He and Mick McCarthy spoke not long after the manager returned to the job and the 60-year-old make it clear that those who were playing regularly in their first teams would have a definite advantage when he sat down to pick his international teams.

Clark says that he had no issue at all with that and is just relieved now to be in a position to start making up some of ground he has lost since being an automatic starter through the latter part of the World Cup qualification campaign.

That, of course, culminated in the crushing home defeat by the Danes, something he says everybody is absolutely determined to avoid a repeat of.

“Definitely I think there will be some motivation there [for Monday],” he says. “Obviously everyone remembers that game. We definitely think about the revenge side of it. We don’t want that to happen again. There was a big chance [to qualify] the last time and everyone knows we messed that up. I’m sure no one will want to make that mistake again.”

It is highly unlikely, he accepts, that he will get the chance to play a central part in this encounter but the game against New Zealand will feel like another step in the right direction he had seemed to lose his way a little.  “Coming back in, obviously the lads have done brilliantly. They’ve had some great results and to be in this position is brilliant. For me, just to be back in has been good. It’s another step forward. I’ll just take it day by day, game by game really. We’ll see what the week brings and then I’ll be back to club level again. I’ll have to try to keep playing games so I can stay in the squad. For now, I’m just glad to be back involved.”

Meanwhile, Troy Parrott says he is excited to get the opportunity to train with players he was watching on television just a few weeks ago and thrilled he is about to get to play his first senior game for Ireland but he admits that being a striker who has scored goals for various underage teams has helped accelerate his progress up the international ranks.

“For me it’s about scoring goals,” he said in an FAI interview. “That’s all I want to do to be honest and that stands out when people are looking and saying: ‘Ah yeah. He got another goal,” or an assist or whatever. If someone can score it helps you to get up the levels more quickly and I did it again for the 21s, I scored again on my debut.

“I’m not planning on stopping now,” added the 17 year-old with a laugh.

1 Seán O’Brien: Anger over my parents’ break-up never left me
2 Madness or defiance? The GAA is taking a huge gamble in staging Championships
3 Sportsman to statesman, Marcus Rashford is a ray of light in the darkness
4 All in the Game: Klopp’s Amsterdam subs don’t go down well
5 Plenty of positives for Farrell as Ireland hit the ground running
Real news has value SUBSCRIBE
Crossword Get access to over 6,000 interactive crosswords