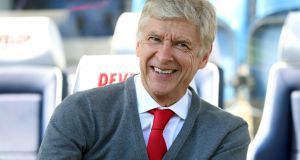 Arsène Wenger has taken up a new role with Fifa as its chief of global football development, the game’s world governing body has announced. Wenger, 70, will be at the head of all Fifa’s football development activities throughout the world for the men’s and women’s game, including its coaching, training and coach education programmes. His department will be involved in football elements of Fifa’s development projects through its Forward programme, under which $6m is being made available to every football association in the world.

The role for the former Arsenal manager will also include chairing Fifa’s technical study group, and overseeing Fifa’s participation in the International Football Association Board, which governs the laws of the game and any rule changes, such as the recent introduction of video-assisted refereeing.

The appointment is the first formal role Wenger has taken since his emotional departure from Arsenal at the end of the 2017-18 season after 22 years as the club’s manager. He was recently linked with the vacant manager’s job at Bayern Munich, after Niko Kovac left the club on 3 November following a 5-1 defeat to Eintracht Frankfurt .

Wenger did say last week that Bayern’s chief executive Karl-Heinz Rummenigge had called him to ask if he was interested in the job, but after initial talks, Wenger said on Monday he was “not in the running for the job”.

Two days later, Fifa has unveiled Wenger as their choice to head the next phase of its football development. The Fifa president, Gianni Infantino, has made it a core ambition of his tenure to try to introduce more football expertise and experience into the organisation’s management, as part of the response to the 2015 corruption scandals and the perception that Fifa had become too concerned with making money.

An early appointment was the former Croatia playing legend Zvonimir Boban as deputy general secretary, before he left in June to join his former club Milan as chief football officer. - Guardian

1 Trump in the rough over playing golf and US Covid-19 fatalities
2 Awarding of 2023 Rugby World Cup to France part of Laporte investigation
3 Suarez’ Italian language exam rigged according to prosecutors
4 The Offload: Saracens prove Pro14 is not fit for purpose
5 What next for green jersey hero Sam Bennett after toughest of Tours?
Real news has value SUBSCRIBE
Crossword Get access to over 6,000 interactive crosswords