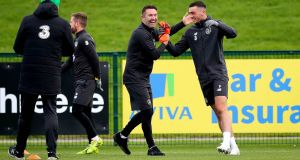 It seems hard to imagine that the FAI’s managerial succession strategy will provide us with a stranger occasion than Ireland’s game against New Zealand. Just four days before the make-or-break group game against Denmark, Stephen Kenny might ultimately get more to mull over from Thursday’s outing at the Aviva than the man he is due to take over from in the summer of next year.

Mick McCarthy has not entirely ruled out the possibility that Robbie Brady might start both games but only a couple of others, he said yesterday, will feature more than once.

And so, perhaps the most significant thing to be taken from the team he named late on Wednesday afternoon is that Alan Browne, who is in this evening, might have slipped back out of the more meaningful starting line-up which would be something of a surprise given that he scored over the weekend.

The manager certainly gives the firm impression of already having a very strong sense of how he will approach Ireland’s final group game and so most of those who face the “All Whites”, the likes of Josh Cullen, Derrick Williams and Seani Maguire, will be clear about the fact that the opportunity on this occasion is to position themselves for slightly further on into the future.

That might be the spring, or hopefully next summer’s Euros but in the case of Troy Parrott, the bright future McCarthy says lies in store for the Tottenham striker may well not kick completely in until Kenny has taken charge.

The 60-year-old made appropriately positive noises regarding the 17-year-old’s first couple of training sessions with the senior squad but was at pains to point out that, having played just 66 minutes of League Cup football for Spurs, he would have to make quite the impact on his senior debut to seriously suggest he is ready to be thrown into what is likely to be, even by the standards of senior international football, a fairly demanding encounter with the Danes.

There is no denying the young Dubliner’s vast potential – even the couple of appearances for the Under-21s have been enough to underline that – but the hype surrounding the teenager has again nudged McCarthy towards the sort of “damned if he does, damned if he doesn’t” territory the manager found himself inhabiting with regard to Aaron Connolly only last month.

On that occasion, he “did” and the 15 minutes given to the young Galway man in Georgia suggested he was right, although there had at least been a couple of Premier League goals to point to on that occasion.

The start in Switzerland, however, did not go so well for Connolly and, though he has readily acknowledged that not too many others had a great night in Geneva, the regularity with which McCarthy has referenced that game this week has only served to strengthen the impression that he feels people are getting a little ahead of themselves with regard to the Dubliner, who will be the country’s third youngest senior debutant, after Jimmy Holmes and Robbie Keane.

The latter, a striker McCarthy famously gave his debut to in Olomouc 21 years ago, is the comparison repeatedly made to the manager now, but he doesn’t come across as completely convinced.

“Can I say something?” he asks, sounding like a man who feels a reality check might be required. “Robbie Keane was playing in the Wolves’ team at 17, playing competitive football in a first team environment. There is a huge difference, a huge, huge difference.

“It doesn’t take a special kind to be pitched in. It takes a special kind to thrive, to do well, to make a good impression and impress everybody. I hope that’s going to be the case with Troy. Robbie did it instantly.”

Anything is possible, he still suggests, not just for Parrott but the entire generation of young Irish striking talent that appears to be coming through but, be observes, “they’re all coming through at the right time, because Stephen is getting the gig in July so he’ll know them far better than I do”.

Jack Byrne, whose continued progress this year McCarthy praised, and Lee O’Connor, who like Parrott will make his debut, will feature from the outset while Ciaran Clark returns after an absence of more than a year and Kieran O’Hara seems will be first up in a goalkeeping double act with Mark Travers.

Brady’s performance is probably of the most immediate significance, however. The manager had sounded in recent weeks as though he was particularly keen for the 27-year-old to get enough game time at Burnley to make his inclusion from the outset against the Danes seem a pretty safe bet. That, though, didn’t happen and he hinted yesterday that the midfielder might be held in reserve on Monday until later in the game when things have opened up a bit.

Still, he did not rule a change of plan, observing: “If you see me taking him off, he might have a chance of starting.” He and Browne might try to stage a dressing room sit in at half-time.

New Zealand, McCarthy insists, will make it competitive and hopefully he is right, although the Aviva stadium has certainly hosted some pretty poor games in what seemed like more promising circumstances than these.

For Ireland, right now, Denmark is all that matters and McCarthy’s team selection will be shaped almost entirely by the need to keep those likely starters not urgently in need of a run-out tucked up and safe from harm.

That is unlikely to do much for the size of the crowd. There are over 30,000 tickets for the game out there and scope for some sort of walk-up.

The actual attendance, though, will depend on how many season ticket holders brave the chilly November night air but quite a few might take a lead from the manager’s approach and save themselves for Monday’s main event.

Rangers move closer to the title as Celtic get back on track 22:02
Rory McIlroy has US Open in mind as he takes on Torrey Pines 21:03
Wolves stalemate kickstarts Thomas Tuchel era at Chelsea 20:18
Burnley battle back twice to see off Aston Villa 21:57
Six Nations still waiting on green light from French government 19:27