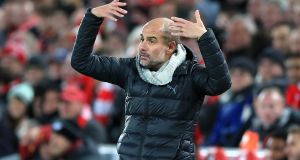 Pep Guardiola said the referees’ chief Mike Riley should explain the latest controversy involving VAR as his Manchester City team fell nine points behind Liverpool in the title race with a 3-1 defeat at Anfield.

Trent Alexander-Arnold escaped a handball inside his penalty area 22 seconds before Fabinho’s stunning goal sent Liverpool on their way to a hugely significant victory which leaves them eight points clear at the top. The City manager made his feelings clear to the fourth official Mike Dean, and again when a second penalty claim against the Liverpool defender was rightly dismissed in the second half. He also exchanged words with the match referee, Michael Oliver, after the final whistle – appearing to sarcastically say “thank you so much” – but denied saying anything untoward.

Afterwards Guardiola, who has been on the receiving end of several VAR controversies, insisted it was Riley’s responsibility as general manager of Professional Game Match Officials Limited to explain the varying interpretations of the handball rule.

These games are part of life, sometimes for us and sometimes against

“I’m uncomfortable because it looks like Pep is complaining, but congratulations to Liverpool, 3-1, could we have done differently on the second, third one – is it a penalty, isn’t it a penalty? I don’t know what with all these ifs, you don’t know what will happen in the future. Ask the big bosses.

“Tomorrow I go to the Uefa meeting and we discuss these things. What can I say? It’s not nice for this club. We have started to be in the elite in the last 10 years, not like Liverpool, you’ll never walk alone, who have been there 30 years, 40 years, 50 or 60 years. We are new to that. The organisation will help us to grow, these experiences will help. These games are part of life, sometimes for us and sometimes against. The referee and these kind of decisions, ask the big bosses, they know more than me.”

However, the City midfielder Ilkay Gündogan said: “I saw the incident again in the dressing room afterwards and for me, obviously, it’s a penalty, but if you ask a Liverpool player they would say: ‘You can give it but it’s maybe a 50-50 situation.’”

The Premier League has a different threshold for handball than Uefa. Under the explanations given by the Premier League in August, Alexander-Arnold could have been penalised for making his body “unnaturally bigger” but not for a handball that followed a ricochet off a nearby player. PGMOL clarified: “The VAR checked the penalty appeal for handball against Trent Alexander-Arnold and confirmed the on-field decision that it did not meet the considerations for a deliberate handball.”

The second goal we scored, I don’t think I’ve ever seen a goal like this. The boys deserved these three points

The defeat – City’s third of the Premier League campaign – leaves the reigning champions fourth in the table and with a major task of catching Jürgen Klopp’s unbeaten leaders. Guardiola said his team’s performance “showed why we are champions” and left him feeling prouder than ever at Anfield, but Liverpool ruthlessly exploited City’s defensive vulnerabilities as they recorded a 46th league game unbeaten at home.

The Liverpool manager said: “I haven’t seen the penalty incident in the first half before Fabinho scored, so I can’t say anything about, but I’ve heard it was first handball by Bernardo Silva. I don’t know. I can imagine it’s not a situation Pep is really pleased with. That’s normal. But the reaction we showed, 22 seconds later we were in front of their goal and Fabinho with his stunner brings us the 1-0 lead.

“The second goal we scored, I don’t think I’ve ever seen a goal like this. A right full-back with a 60-yard pass to the left full-back, two touches and then a cross over 40 or 50 yards and a header. All around these three goals it was the hardest work. The boys deserved these three points.”

Klopp insisted Liverpool have given no thought to remaining unbeaten all season and are feeling no pressure as they enjoy a commanding position in their pursuit of the club’s first title for 30 years.

“We don’t feel any pressure. If you are with us then nine points is a positive. Other people will 100 per cent say that from now on Liverpool can only lose it. That’s a very negative approach, but you can see it like this. But we don’t care.

“Nine points ahead of City, you cannot imagine that something like this would happen. But it’s not important because who wants to be first in November? You want to be first in May. The pressure is not there yet. It will come, but at the moment it’s just opportunity.”

1 Gordon D'Arcy: Ireland must conquer fear on a scary Halloween in Paris
2 Seán Moran: Will a silent, empty Hill help to loosen Dublin’s grip on Sam?
3 Cian Healy: ‘Realistically I got away with murder when I was younger’
4 Dave Heffernan delighted to have banished bad memory of his first cap
5 Robbie Henshaw likely to be the only Irish change for France finale
Real news has value SUBSCRIBE