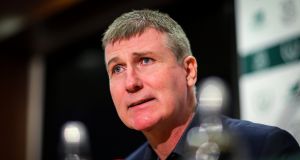 Kenny’s selection will seem more like that for a friendly but injuries, suspensions and Troy Parrott’s elevation to the seniors has deprived him of eight first-choice players for part one of this double-header.

Coming on the back of last month’s first defeat of the campaign in Iceland, and against an improving Armenian side, that has the potential to spell trouble for their tilt at reaching the 2021 finals.

Ireland’s haul of 10 points from the previous four matches keeps them top of Group One, yet a health warning applies given the sequence of fixtures and games in hand for Iceland and Italy.

In that regard, there are similarities with the how the current qualification group has unfolded for the senior squad.

Kenny, due to succeed Mick McCarthy in August, got his wish of frontloading his fixture schedule to minimise disruption in the handover.

Ireland will only have three qualifiers left after Tuesday’s meeting with Sweden at Tallaght, the last of which, the toughest test of all away to Italy next September, they’ll be under new management for.

To ensure the 1-0 defeat in Reykjavik is deemed merely a blip, there can be no further slippages today against the nation below them in the draw.

Kenny could see for himself in the summer the struggles Armenia have in producing competitive teams when attending the under-19s European Championships they hosted.

They have lost three of their four qualifiers to date, including their trip to Dublin in September when Parrott’s goal proved the only difference despite a one-sided affair.

Kenny’s contention that the Armenians will present a tougher proposition on their own patch stems, in part, to them last month extending the Italians to a narrow 1-0 victory at the same national academy venue in Yerevan.

Just like the eerie scene of Ireland losing their unbeaten run, this is another afternoon match played in a stadium with three open sides. The time difference is four hours.

Collins, for one, is confident of the supporting cast getting the win to keep them on course for a top-two finish. Ireland have never qualified for an under-21 tournament but second spot will claim a play-off for the next tournament.

McCarthy is a fan of the Stoke City centre-back, rewarding the 18-year-old’s strides in the Championship with inclusion in two of his provisional squads in recent months.

The 6’4” defender is one of the quartet of debutants confirmed by Kenny and he does harbour ambitions of joining his fellow teen graduates in the full ranks.

“I’ve waited a while for this under-21 debut, so I’m buzzing to get a start,” said the Dubliner, whose father David was capped up to this level in the early 1990s.

“I’m always looking to progress and hopefully can keep moving towards the senior squad.

“We know that this Armenia side can be dangerous but our camp has gone well and we’re very confident of getting the win.”

1 Gordon D'Arcy: I know what Joe and Cheika would do. Fix the basics
2 Darragh Ó Sé: Cork and Donegal went out with the wrong attitude
3 Simon Easterby admits Ireland may need to take new line on maul
4 Can Solskjaer’s Man United find their groove when it matters?
5 Sean Moran: Bloody Sunday centenary weekend will live long in the sporting memory
Real news has value SUBSCRIBE
Crossword Get access to over 6,000 interactive crosswords