Rice to discuss his international future with Ireland manager McCarthy 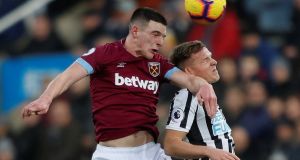 Declan Rice: “Obviously the England-Ireland situation is a lot to take on. To be honest, I’m just focused on playing for West Ham.” Photograph: Lee Smith/Reuters .

Declan Rice has said he will discuss his international future with Mick McCarthy, offering the FAI a glimmer of hope that the London-born teenager capped three times by Ireland will not switch to play for England.

Speaking after giving another mature midfield performance for West Ham United at Newcastle on Saturday, Rice said he would be in training on Sunday morning and checking the Euro 2020 draw afterwards.

There is no date arranged to meet with McCarthy but it is expected to be soon. McCarthy has already had a conversation with Rice’s father, Sean. England manager Gareth Southgate has talked to Rice.

“Mick has spoken to my dad and I think Mick said he wants to meet me and my dad, which I said was fine,” Rice explained.

“I haven’t spoken to Mick myself yet, but [I’m] going to speak to Mick.

“Nothing’s planned, I haven’t spoken to Mick yet, just my dad [has]. My dad’s away at the moment.”

Given the Euro 2020 qualifiers begin in March, it would be surprising if there is not a decision from Rice before then, although he said it was just one of a few issues he is facing.

‘There are a lot of things going on with my football at the moment,” Rice added. “I’m playing here week in, week out and obviously there’s my contract situation, which is a lot to take on at a young age.

“Obviously the England-Ireland situation is a lot to take on. To be honest, I’m just focused on playing for West Ham and I said that to Martin O’Neill, when I was playing and, obviously, now he’s gone. He totally understood and respected that.”

This has been a transformational year for Rice, who made his Irish debut in Turkey in March. He turns 20 in January and said he has grown literally and in terms of his understanding of the game.

“I’ve shot up, my mum and dad keep telling me that,” he said. “I’m 6ft3in now. When I was in the academy at Chelsea they did this test which told me the height I would be, and it’s spot on, the bone age.

“Where I’ve gone to now is my peak height. It means, for someone like me, I can play at centre-back or midfield because you need height. I have come up against world-class players this year but, like I say to the lads, it’s only a game of football.”

5 Rory McIlroy leads Tyrrell Hatton by one in Abu Dhabi