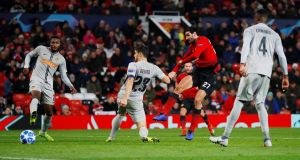 Manchester United qualified for the Champions League knock-out stage on Tuesday night after Marouane Fellaini scored in injury time, putting a gloss on what was another generally uninspiring display up front. The very last thing United wanted or needed at this stage of the season was another tame scoreless draw at home three days after the last one – yet that is almost that they got.

“This is the Champions League, there can be no room for complacency,” Jose Mourinho said beforehand. “No thinking that the job is done because we have beaten a super team in Juventus, or because we beat the Young Boys in Bern on matchday one.”

It is probably about time the United manager sent out some unequivocal messages to his players, even if he risked undermining his own words by starting with Paul Pogba and Romelu Lukaku on the bench and selecting Phil Jones in defence for the first time since the Derby County fiasco back in September.

“Every player needs to perform properly,” Mourinho continued. “If we play like we did against Crystal Palace we will not win the game.”

United showed six changes to the side held at home in the league at the weekend, with Antonio Valencia and Fred also coming in from the cold.

Mourinho could be seen shaking his head on the touchline five minutes into the game when Marcus Rashford missed the first opportunity to prevent another scoreless draw. Timing his run well and outpacing Steve von Bergen to reach the edge of the area with only the goalkeeper to beat, Rashford was if anything guilty of overconfidence in his finish, shooting early but managing to clear the bar as well as David von Ballmoos.

Fred fired narrowly over as the home side tried to establish an early lead, before Rashford brought a save from Ballmoos after being slipped in by Marouane Fellaini.

A quick goal might have settled the home side’s nerves, but as it was they were caught so badly put of position when Young Boys launched a counterattack that Nemanja Matic and Luke Shaw were both booked for separate fouls.

Perhaps there was no reason for United to be nervous after beating their opponents convincingly in Switzerland, but Mourinho’s reaction to the Palace disappointment included some advice to fans to stay at home and watch on television if they could not cope with the pressure at Old Trafford.

Whatever the reason, by the half hour mark the game had settled into a familiar pattern, with United doing most of the attacking but lacking the inspiration or quality to make their superiority count in the final third. Jesse Lingard and Anthony Martial both surrendered possession through untidy passing, as did Fred, who after a bright start had to keep dropping deeper to make something happen.

Typical of United’s frustration was an incident shortly before the interval when Rashford surged powerfully through an attempted tackle by Von Bergen on half way. It was a promising opening and the crowd stirred as Rashford broke forward, only to see him pause and change direction as he waited for support to arrive. None did, and though Rashford twisted and turned in the penalty area he was eventually dispossessed by Von Bergen, the defender he had originally left stranded 50 yards further back.

It was a similar story when Rashford popped up on the left in United’s last significant attack of the first half. He did well to stride into the area and make it to the goalline, and had the right idea in cutting the ball back for Fellaini to shoot; it was just that the pass missed its intended target by several yards.

Kevin Mbabu gave United a scare at the start of the second half, finding a way past Jones to shoot into the side-netting, just before Rashford did the same at the other end, this time from a situation where either he or Martial should have scored.

Again Mourinho’s reaction was to turn his back and look exasperated, a feeling that the crowd shared when Fellaini failed to take advantage of a mistake by the Swiss goalkeeper and then hooked over the bar from close range.

With just under half an hour remaining Mourinho sent on his two most expensive substitutes, Pogba almost immediately creating a chance from which Rashford should at least have hit the target. Lukaku set up Martial minutes later with the same result, and United were mightily relieved when a hitherto unemployed David de Gea responded quickly to stop a deflected shot from Ulisses Garcia right on the line.