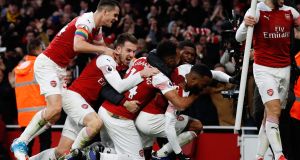 Arsenal extended their remarkable unbeaten run in all competitions to 19 matches but now they have their statement victory. Unai Emery and his re-energerised team have built momemtum and belief during the sequence, although they had not beaten a Big Six Premier League rival.

That changed on a wild afternoon in north London when Pierre-Emerick Aubameyang continued his dead-eyed scoring exploits and Arsenal came from 2-1 down to overwhelm the team that they most love to hate.

Aubameyang scored the equaliser for 2-2 – his second of the game – and the statistics showed that he has scored with his last 10 shots on target in the league. It was the substitute, Alexandre Lacazette, who put Arsenal in front with a shot that deflected off Eric Dier and spun past Hugo Lloris and the outstanding Lucas Torreira added the gloss with his first goal in Arsenal colours.

Tottenham’s frustration was complete when Jan Vertonghen jumped into a rash challenge on Lacazette to earn a second yellow card on 85 minutes and they will reflect on how they stabilised after an early concession to lead at half-time only to be overwhelmed towards the end. After six straight wins in all competitions, this was a jolt.

Emery deserved much of the credit for how he reacted at 2-1 down, making bold attacking changes, the first of which saw Aaron Ramsey and a second striker, Lacazette, enter for the second period. At 2-2, Emery moved to a 4-4-2 diamond midfield system and, on each occasion, the dividends were immediate.

His ability to alter the course of matches with tactical and personel tweaks has been an impressive feature of his tenure. He had started with the 3-4-2-1 formation that he showed off last Sunday at Bournemouth and it was designed to give Arsenal a platform higher up the pitch; to get their wing-backs further forward.

They started at breakneck pace and Spurs were rattled, forced into errors in the early running. Serge Aurier allowed a routine ball to slip away under his studs and, when he tracked back, he clipped Aubameyang needlessly. From the free-kick, taken by the captain, Granit Xhaka, Arsenal got the penalty that put them ahead.

Shkodran Mustafi found a pocket of space and, when he rose, it seemed as though he was primed for a free header only then he was not. It looked unnatural but Mike Dean cleared up the confusion. He spotted that Vertonghen had swiped the ball away with his hand. Aubameyang converted the penalty before celebrating, unwisely, in front of the away supporters, who pelted him with a few things. Vertonghen was booked for the handball.

Arsenal were irrepressible in the opening 20 minutes, with Sead Kolasinac, in particular, making dangerous inroads up the left. He cut one cross back for Alex Iwobi, who forced Lloris into a smart save with his legs. Moments later, the other wing-back, Héctor Bellerín, saw a volley at the far post blocked by Ben Davies.

It felt as though Arsenal might struggle to maintain the intensity and Spurs roared back into the game, turning it on its head before half-time. Dele Alli had started off the left but he regularly tucked in behind Harry Kane and Son Heung-min and the visitors gained a foothold. Son showed his pace and threat with a series of darts, two of which saw him work Bernd Leno from tight angles.

The equaliser came from a Christian Eriksen free-kick, whipped in towards the near post, and it was a horror moment for Leno when he allowed Dier’s flick header to bounce, rear up above his hands and squirm inside the near post. All hell then broke loose when not only the Arsenal fans but some of the club’s substitutes, chief among them Stephan Lichtsteiner, took exception to Dier’s celebrations with his teammates.

Players in red and white converged, with Ramsey, who was off the field at that point, having to be pulled apart from Alli. Even Mauricio Pochettino got involved, running up the touchline to act as a peacemaker. Game on.

Son sprinted through again and Rob Holding jumped into a risky tackle but, when Son checked back, there was no contact from the Arsenal defender on him. Dean still awarded the penalty when Son went down and Kane banged low into the corner for his eighth goal in eight games against Arsenal. He has equalled Emmanuel Adebayor’s scoring record in north derbies.

Mustafi hit the crossbar with a looping header from a corner in first-half stoppage-time but Spurs were in the ascendancy and Emery made his double substitution at the interval. Arsenal were level soon enough. Bellerín curved a ball forward in behind Vertonghen and Ramsey twisted his body to hook it inside for Aubameyang. The striker bent a precision first-time finish inside the near post. Lloris was rooted.

It was easy to forget the subplot of Mesut Özil’s absence. The club said that the playmaker had felt another of his back spasms but there was nevertheless plenty of eye-rolling when the teamsheets landed.

Spurs had flickered at the start of the second-half, with Kane twice going close but Arsenal – and Emery – turned the screw after the equaliser. Mustafi was denied by a goalline clearance by Alli and, after Son had worked Leno following a Bellerín error, Emery swapped Mustafi for Mattéo Guendouzi and went to his midfield diamond.

Ramsey initated Arsenal’s third goal when he robbed Juan Foyth and found Lacazette. There was an element of fortune because the striker was slipping as he shot – there was also the deflection off Dier – and the best day of Arsenal’s season was complete when Torreira rolled away from Dier on to Aubameyang’s pass and shot low into the far corner.