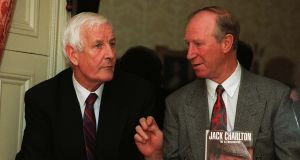 Jack Charlton in conversation with Peter Byrne at the launch in the Shelbourne Hotel of Jack Charlton - The Autobiography, which Peter collaborated on. Photograph: Frank Miller

An outpouring of affection, which might have flattered royalty, was the predictable reaction to the news that Jack Charlton, a great traveller in a crowded life, had made his last journey on Friday evening.

For close on 60 of his 85 years, his was a name which resonated across the continents. And nowhere did it generate a greater sense of warmth and appreciation than in Ireland.

The Charlton years, embellished in song and story, transcended sport. For those who struggled through the misery of the 1980s, they represented a lighthouse to a better and brighter life.

It was at a funeral service in Manchester for the late Bob Williams, a newspaper colleague of mine who lost his life in tragic circumstances, that I first encountered Charlton on a personal level in the 1960s. As northern sports editor of the Daily Telegraph, Williams covered Leeds United’s games on a regular basis and I was greatly impressed by the fact that the great majority of the Leeds squad were present for the service.

That was an opportune character assessment of the man and talking with Jack later I was at once taken by his honesty. And that was a trait that I came to admire when he arrived in Dublin in 1986 to take charge of an Ireland squad which had underperformed in failing to make the cut for the finals of World Cups and European Championships.

What you saw is what you got, a true son of Geordieland in the north east of England, who told it as it was, revealing a streak of honesty which was impossible to overstate.

On the face of it he was a gruff individual who didn’t suffer pretence easily. The reality was that he was a very sensitive person.

Like many people in the north east of England, Charlton considered that he had more in common with the Irish than those running the country from London.

And that feeling was reinforced in 1971 when he travelled with Leeds United for a friendly game in Waterford. The flight was routed to Cork where a fleet of cars were on hand to transport players, club officials and sundry others to Waterford.

It so happened that the driver of the car in which Charlton was seated was a trifle thirsty and they had only gone a few miles down the road when he and his passengers pulled into a pub for refreshments. As Jack recalled it there were at least three other pit stops before arriving in Waterford suitably relaxed.

Don Revie, the Leeds manager wasn’t best pleased to say the least, but the man who would later become the king of Irish football was smitten by the informality of it all and the manner in which the incident was quickly written off.

For close on 10 years, he often appeared to hold the country in the palm of his hands as he led the Republic of Ireland squad to finals of the European Championship in Germany in 1988 and then the finals of the World Cup which followed in Italy and the US.

To keep a small country at the cutting edge of international football for so long was an astonishing achievement for any manager and it earned him a reputation which was the envy of many of his peers.

As a World Cup winner with England he was a celebrity long before he was awarded the responsibility of leading Ireland to more fertile fields.

Long after he left the FAI to settle into retirement at his home in Newcastle, he was still euphoric about the reception he got from Irish people. He once said “to win a World Cup medal with your native country is the supreme achievement for any player but in my case, the time I spent with Ireland ran it close”.

“And one of the most rewarding aspects of the job was the way everybody in Ireland got behind the squad, at that point, they were far and away the best supporters in the World.

“At a time when violence was rife at football games across Europe and beyond, our supporters were a credit to the country and that gave me a sense of satisfaction which equals anything achieved on the pitch.”

By the time he had finished his term of office in Dublin he would be regarded by many as more Irish than British, a sharp contrast to some of the sceptics who had warned against the gamble of seeking a non-national to manage the team.

A couple of years ago on the occasion of his birthday I talked with him on the telephone and invited my grandson to offer his congratulations on the phone to the Big Man. “We all sing songs about you, when we go to watch big games in the Aviva Stadium,” he told him, whereupon Jack asked him to sing one. He launched into a not particularly skilled version of ‘We’re all part of Jackie’s army . . . ” When he finished Jack apparently handed the phone to his wife who in turn asked me what had gone on during the call. “That explains why he appeared to be so emotional,” was her response.

1 Worst sporting moment: White knuckle ride on a hate-filled night at Windsor
2 Rugby to return in England with rucking but no hugging
3 Acute disillusionment the only response to growing FAI debacle
4 Worst Sporting Moment: Mighty Nijinsky misses moment of triumph
5 Irish roots with the bit of Jo’burg dog: Curtis Campher has arrived
Real news has value SUBSCRIBE
Crossword Get access to over 6,000 interactive crosswords