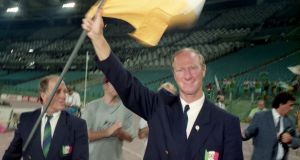 Jack Charlton waves to the Ireland fans after the quarter-final loss to Italy at the 1990 World Cup. Photo: Billy Stickland/Inpho

This was a big one. You hear of well-known people dying all the time and you don’t usually be long moving on. Ah no, that’s sad now. Was she sick? She’d have been a right age I’d say. What’ll we have for dinner?

But Jack Charlton on a Saturday morning, that’s a different thing. It’s been a different thing all weekend. Poor Jack. Ah, he was some character. Never bought a drink, you know. Sure he’d pay for them all by cheque and the barman would frame it and never cash it. And wasn’t he just right, the same boy? After everything he did for us. Those were the days.

They really were. The reactions on either side of the Irish Sea tell the tale. Charlton is the second of England’s 1966 World Cup winners to die this year and his passing led the sports bulletins over there on Saturday. You could sense in the coverage a deep fondness for him, an obvious and genuine love for a football man with an outsized personality. But it didn’t compare to how the news was received over here.

They loved Jack Charlton in England but in Ireland, he was adored. Some of it was, of course, down to who he was. The big likeable head on him, the smiley persona, the yarns and all that. The fishing on the Moy, the keg of Guinness in the hotel room, the inability to remember the players’ names. All of it drew people to him naturally and organically.

He was the kind of dude we like liking. A bit ramshackle, a bit rough around the edges, not bothered with how he looked or sounded. Didn’t take any nonsense, made a point of standing up for the little guy – remember him telling the cops in America to leave the Irish lads that ran onto the pitch alone? And on top of all that, he was successful.

So yeah, we would probably have liked him one way or the other. But if you cupped your ear and listened over the past 48 hours, it wasn’t really Jack Charlton we were mourning. It was some past version of ourselves. The outpouring wasn’t about so much about who he was, it was about what happened. It wasn’t Him. It was Us. And it was Then.

There has maybe never been a better line in Irish sportswriting than Con Houlihan’s, “I missed Italia ‘90 – I was away at the World Cup.” Everybody who was alive for it has a memory of it. Of who they were and what it was to them.

We landed down to the in-laws on Saturday afternoon and nearly the first thing out of my sister-in-law’s mouth was: “Ah, poor Jack. I had to get my wedding dress let out twice because of Italia ‘90. The second time I went in, the dressmaker said, ‘Listen now, there’s no more material, okay?’ The craic we had.”

Nothing in Irish life lives in the race memory like it. It was, as Nell McCafferty wrote at the time, a chance to be innocently happy. And maybe we try a bit too hard at times to hang onto it or to recreate it. But on the whole, that’s not a bad aspiration. You’d give plenty to be innocently happy just now.

The night before Ireland played Sweden in Paris at Euro 2016, we were down by the Pont St Michel having a beer. A Swedish couple walked by, hand in hand, and stopped to cross the street just outside the terrace bar we were at. Upon which, a group of Irish lads beside us starting to serenade them with a bar of Thank You For The Music. The two Swedes bent double laughing, the crossing lights changed and they went on their way and the night was good.

Now, you can roll your eyes at this kind of stuff, by all means. It’s true that it can all get a bit too performative and tiresome after a while. But it’s reasonable to beg a couple of allowances, if you don’t mind.

One, there are plenty worse things in life to be than a happy gobshite abroad. And two, the people doing that in 2016 – or any other time before and since – grew up on tales of Irish fans in West Germany and Italy and America and them the toast of every town they visited. They are still, consciously or otherwise, all part of Jackie’s Army. There’s no shame in wanting in on a bit of all that.

Nostalgia gets a bad rap. The lockdown brought out its worst excesses, especially in sport, where waves of it came down upon us whether we liked it or not. That kind of nostalgia is the worst sort of living in the past because it serves only to emphasise your grievances with the present. That does nobody any good.

But in small doses here and there, the past can be a lovely place to visit. And for whole generations of us, Jack Charlton represents exactly that. When it comes down to it, this is what people were connecting to over the weekend as they marked the passing of the big Englishman who led it all.

In the end, it doesn’t really matter whether the football was any good or whether Big Cas was actually Irish or whether it created the Celtic Tiger or whether it led to Riverdance taking over the world or any of the countless claims – some spurious, some less so – made on its behalf.

It only matters that the Charlton years were a great thing that happened to a country that wasn’t used to great things happening. And now, a generation later, it matters that people still have that in their folk memory. It matters that all you need to hear is Charlton’s voice firmly stating, “We’ve qualified for the World Cup, we’re going to compete” and straight away you’re out with the air guitar and you’re belting out Put ‘Em Under Pressure. It matters that it brings simple, unblemished joy when you do it.

Sleep well, Jack. We were happy. You did that.

1 Sporting Cathedrals: How the Olympiastadion overcame history
2 James Ryan injury could open the door for Ryan Baird
3 All in the Game: Klopp gets the last laugh in quiz show
4 Banned Totti gets roasting over spit
5 Lockdown hiatus may afford way back for Waterford hopefuls
Real news has value SUBSCRIBE
Crossword Get access to over 6,000 interactive crosswords