‘Jack used to call me his official grasshopper keeper. We had a great time’

‘Don’t be surprised if in coming years a bronze statue of a tall, flat-capped man carrying a fishing rod is erected along the river Moy’ 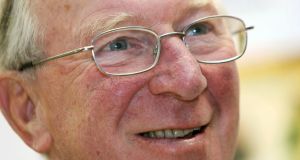 Jack Charlton. “He might have been a world famous footballer but there was no swanky talk from him. He was down to earth, straight to the point.” Photograph: James Crombie/Inpho

Expressions of fondness and admiration for the late Jack Charlton in Ballina, Co Mayo, have been flowing free and fast as the waters of the local river Moy since news of his death broke on Saturday morning.

For more than two decades, until advancing years prompted him to sell his Irish holiday bolthole, angling fanatic “Big Jack” was almost a fixed presence on the Moy’s Ridge Pool.

“He would stand there in driving rain casting line after line even if he hadn’t got a bite for hours,” said John Walkin, one of the ex-Ireland manager’s long-standing friends in the north Mayo area.

The former fishing tackle shop owner fondly recalled meeting Jack for the first time near the banks of the river in the 1980s to discuss the possibility of a guest appearance at the Western People Sportstar Awards.

“It was 8am, and Jack was eager to make his first ever cast on the Ridge Pool, but he graciously agreed to wait for a short time until my son, John Bosco, got back from serving Mass in St Muredach’s Cathedral so they could be photographed together,” he said.

“Then a gaggle of secondary schoolgirls who had been on their way to classes swooped on Jack seeking autographs. He obliged, after winking and telling me, ‘oh, John, they think I’m a film star’. The banter with the girls continued for some time. It was a lovely, kind gesture on Jack’s part.

“He might have been a world famous footballer but there was no swanky talk from him. He was down to earth, straight to the point. He called a spade a spade, and was a thorough gentleman.

“It was a privilege to have met and known him. He was not an extraordinary friend of mine but a nice friend to have, and we would always have an interesting talk.”

In an article for the Hooked on the Moy magazine, edited by John Geary, Jack outlined some decades ago how he fell under the spell of the river Moy when he first arrived in Ballina after trying other angling locations in Donegal and Sligo.

“After stopping on the bridge at the Ridge Pool we saw several spring salmon being landed in quick succession on the fly…we knew we had arrived in an anglers’ paradise…next year’s destination (fishing) was decided in seconds.”

Geary, who commissioned the magazine article, recalls that as a youngster in 1987 he acted as a kind of unofficial ghillie when Jack participated in a film promoting angling tourism in the Mayo area.

“My job as a 10-year-old or so was to look after the grasshoppers which were used as bait when we fished Lough Conn. Jack used to call me his official grasshopper keeper. We had a great time.”

When Geary’s parents ran the Pontoon Bridge Hotel, Jack was a regular visitor. On one occasion he brought along Kevin Moran, the former Dublin and Manchester United footballer. Word soon spread via the hotel phonebox, and the place was soon crammed.

After his fruitful initial angling visit to Ballina, Jack and his wife Pat decided to make the town their second home. They cemented their connection with the area by buying a house at Moy Heights on the outskirts of the town.

Michael Boland, an auctioneer who sold the holiday home for the Charltons in 2014, said: “He was an absolute gentleman, and Pat is a lovely lady. I think that with advancing years the upkeep of the house and the travelling got too much for them. They have been sadly missed since their departure.

“Jack was part of the community, a lovely man. Everybody loved him. People left him to his own devices when fishing and socialising. I think he liked that.”

Despite his long connection with Ballina and the extra tourism profile the area gained from his presence, there are no local memorials in Ballina in Charlton’s honour, although a fishing pool – where he landed a 12lb salmon at Coolcronan, Foxford – has been named after him.

However, as his friend Walkin observed at the weekend, that will surely change. “Don’t be surprised if in coming years a bronze statue of a tall, flat-capped man carrying a fishing rod is erected along the river.

“After all the friendships he has created and the angling profile he has given the area it’s the least that Jack deserves.”

Golf Majors return with US PGA, Man United progress in Europe
Here is your handy guide to sport on television this week