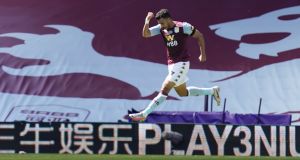 Mahmoud Trezeguet celebrates after scoring the first of his two goals for Aston Villa in the Premier League game against Crystal Palace at Villa Park. Photograph: Tim Keeton/EPA

Aston Villa are not going to go down without a fight after all. They started slowly here but ended up relatively rampant, fully deserving of the three points secured by two goals from Mahmoud Trezeguet. It has been a long time since a Villa forward scored one goal, let alone a pair, so Dean Smith’s side were grateful for the Egyptian’s sharpness, which ended a streak of 10 leagues games without a win.

Villa are still in the relegation zone but only four points below West Ham and Watford. Their remaining matches are against Everton, Arsenal and West Ham. They cannot count on any of them being as vulnerable as a Palace side who sagged to their fifth straight defeat.

Before anyone could mull over purely football problems, both clubs were moved to condemn another outbreak of racism, as Wilfried Zaha revealed abuse he was sent on social media before the game.

“We deplore the disgusting racist message sent to Wilfried Zaha,” said Aston Villa in the statement before kick-off. “We are working with the police in investigating this extremely serious matter and when the culprit is identified AVFC will issue a lifetime ban.” Crystal Palace said: “This is an absolute disgrace and should not be happening. We stand with you, Wilf, and anyone else who has to suffer such horrific abuse.”

When the game got going, it had a more sedate pace than might have been expected from a clash with such high stakes for Villa. Palace even had the ball in the net in the seventh minute when Mamadou Sakho redirected a free-kick into the net. But the goal was disallowed after VAR ruled he had used his arm rather than his shoulder. It was a close call but given the penalty decision that went against Villa here against Manchester United on Thursday, and the goal they had chalked off at Selhurst Park earlier in the season, Villa no doubt considered the verdict a welcome break in their favour.

Then they took charge of their destiny. Ahmed Elmohamady made several raids down the right, but Jack Grealish and Mbwana Samatta both failed to find the net after dangerous crosses by the full back.

Most of the play got bogged down in midfield. Zaha occasionally emerged from the morass to threaten a breakthrough but Pepe Reina saved his best effort in the first half. Zaha was also involved in some feisty barging with Ezri Konsa and Tyrone Mings, and that little flare-up was the main evidence of vim from Palace. Just as the game seemed to be trundling towards the interval, Villa got the goal they badly needed.

After a foul on Grealish, Conor Hourihane curled over a free-kick from the left, Joel Ward could only head it backwards, and Trezeguet tucked it into the net at the far post, becoming the first Villa forward to score in the league since early February.

Villa thought they had got the second half off to a perfect start when they were awarded a spot-kick after Patrick van Aanholt tangled in the box with Grealish, but this time VAR’s intervention went against them and the decision was overturned.

Villa did not dwell on that. They kept attacking. Palace’s attempts to stop them alternated between flimsy tackles and blatant fouls. Vicente Guaita was forced into a flying save from a free-kick by Hourihane, and Konsa came close to scoring from the resultant corner. Then Trezeguet struck again, finishing neatly after Guaita denied Samatta.

Villa did not let up. Guaita was over-employed, compelled to bat away shots by Hourihane and Grealish as the visitors’ defence melted away.

Palace mustered some pride towards the end and tried to make the contest closer. But Reina did well to foil their best effort, prevailing in a one-on-one with Van Aanholt. Christian Benteke was sent off after the final whistle for his role in some angry exchanges as the players headed for the tunnel. – Guardian