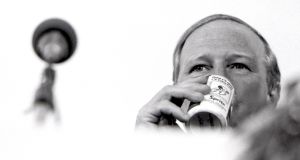 Republic of Ireland manager Jack Charlton has a drink during a press conference at the 1990 World Cup. Photo: Billy Stickland/Inpho

Nothing, it seemed, irked Jack more than that oft-told story about him giving publicans cheques to pay his bar bills because he knew they’re never cash them. Back in 2004 the Guardian asked him about it and he attempted to set the record straight.

“The cheque [story] is a load of rubbish. It’s an old Stanley Matthews story. If there’s one person in Ireland who can produce a cheque from me that was given for that reason by me... well, I’ll, I’ll... give ‘em a load of money.

“It was a piece that was written by a nasty journalist and I got on to me solicitor because it’s a load of rubbish … it’s as if someone’s trying to have a go at me that I’m tight. I might be tight, but I certainly don’t go as far as that.”

But while admitting to be tight-ish, he insisted another time that he hadn’t demanded enormous loot from the FAI when he was offered the job. “I told them it wasn’t about the money. It was about the honour,’` he said, as recalled by Kevin Mitchell in The Observer.

“They wrote a number on a piece of paper, put the paper face-down on the table and slid it over to me. I looked at it and said: ‘It’s not that much of a ****ing honour.’”

As Mitchell put it when summing up this nugget, “he was nobody’s fool”.

How accurate was CNN’s summing up of Jack’s career when they reported the news of his death on Saturday morning? Well, this was the caption they had on-screen:

Key player on the team that won the 1966 World Cup

Was named 1997 Footballer of the Year

Went on to manage other teams.”

As the writer James Hendicott, who shared CNN’s offering, suggested: “Some shambles.” They had him winning the World Cup twice, 30 years apart, once for Britain rather than England, managing “other teams”, which was less than specific (and a bit rude towards us), and collecting the Footballer of the year award when he was sixty-two. Apart from that? Spot on.

In his piece on Jack Charlton in this here paper, Mark Lawrenson mentioned how, when he was with the Irish squad, he “never, ever talked about winning the World Cup”, that he regarded it as history and that “he was only interested in the here and now”. “So he never rammed it down anybody’s throat,” he said, “and he could have done.”

Still, though, you’d imagine his winner’s medal at least held pride of place in his home, maybe framed (and padlocked) above the mantelpiece?

Over to John Anderson, another of Jack’s old boys, who told PA:

“I remember myself and Kenny Wharton going up to see him. Remember the World Cup coins that you used to collect with the players’ faces on? He had a gold set of them and they were in a coal bucket, and beside them in the coal bucket was his World Cup winner’s medal. He didn’t blink an eye. ‘They’re in there’, he said, nodding at the bucket beside the fire.”

How they never ended up in the fire, we’ll never know.

“I did speak to him very briefly, but it was difficult due to his health. I told him I loved the bones of him that day and I always will.” - Mick McCarthy on an emotional last chat with Jack, the day after he turned 85 back in May.

93: That’s how many games Ireland played under Jack, winning 46 of them and losing just seventeen. His 50.5 winning percentage was only topped by Brian Kerr.

Looking back through the archives to find old interviews with Jack, this snippet from a chat with The Guardian suggested that the media industry missed a trick by not employing him as a music reviewer.

“Kylie or Britney,” they asked him.

“Me favourite? You’ve got to admire people, so Kylie Minogue. She appears to be a very nice lass who’s made the best of herself without having a really fantastic ability.”

Come to think of it, that’s kind of how he, modestly, described his own playing career.

Ahead of his time?

It was four years back that, as part of their archives series, BT Sport replayed the 1981 FA Cup final, taking the commentary from ITV’s coverage of the game. Jack was on ITV punditry duty that day and referred to Manchester City’s black winger Dave Bennett as “the little coloured boy”. Following complaints to broadcasting regulator Ofcom they ruled that the term “coloured” was derogatory and that BT had to remove the clip of Jack from any future airings of the game.

His language was, then, decidedly ‘old school’, if entirely common back in that time, but he was no Ron Atkinson. As the Irish United Against Racism campaign noted in their tribute to him at the weekend:

“For anti-racists there is another reason to pay tribute to Jack. In 1977 he, along with another key figure in English football, Brian Clough, was a sponsor and founder member of the Anti Nazi League. This was immensely important. At that point the National Front was making serious in roads into British political life ... overt and aggressive racism was widespread in English football at every level from management to sections of fans. The stand taken by Jack Charlton, and Brian Clough, was therefore a massive boost to the Anti Nazi League and to the antiracist struggle as a whole.”

For all the talk of Jack been old school, in light of current events maybe he was ahead of his time?