Mason Greenwood’s assured elegance looks made for the long road 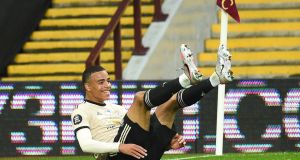 At times this week it has been tempting, but not that tempting, to feel a bit sorry for Mason Greenwood.

Meanwhile the world outside has turned into a pre-zombie apocalypse montage sequence. The Euros have been cancelled. And large parts of the country are sitting around losing themselves in six weeks of reheated microwave football.

Let’s face it, Greenwood never really stood a chance of flowering in the shadows. He is, among other things, something to talk about right now.

At Villa Park on Thursday night Greenwood’s recent goals were replayed from assorted angles. The cameras lingered lasciviously through the warm-up.

“How big a future does this man have?” Kelly Cates asked Roy Keane, who is no longer the wild, moss-encrusted figure of mid-lockdown, but instead appeared on television shaved and trimmed and grimacing in a sports jacket, looking like a battle-scarred off-duty detective inspector two hours into a particularly harrowing parents’ evening.

So that future, Roy. How big? “Massive.”

We know how this tends to go from here. There is a game that plays itself out around the arrival of an exciting teenage talent in English football, one that tends to follow the familiar manic/depressive modelling of most significant events.

Stage one: extreme gurgling excitement. Stage two: a shared angry backlash against stage one, which will now be framed as a key driver in the inevitable media-led implosion of Exciting Teenage Talent.

Either side of which Exciting Teenage Talent is free to get on with the stark, thrillingly brutal business of finding its own level in a sport that has always eaten its young, where margins of fortune and success are fickle, and where so often something flickers for a moment, then vanishes and is gone.

Except, it seems fair to say, Greenwood seems a little bit different. Here is a talented young footballer who doesn’t really look like other talented young footballers. This isn’t about his feats on the pitch, which, in all honesty, are just an intriguing subplot so far. A career total of nine league goals. Two weeks of brilliance in empty grounds against semi-dormant opposition. A scorer this year against Villa, Norwich, Tranmere, Watford, Brighton, Bournemouth and Lask Linz.

To offer some extreme perspective, at the same age Kylian Mbappé was traumatising Manchester City in the Champions League and pushing Cristiano Ronaldo and Robert Lewandowski as the best centre-forward in world football.

Your average extremely talented young footballer takes time to steep and find their level. There is always a period of retrenchment, a ridge of low pressure to pass.

Early on it seemed possible there might even be a bump in the road at Villa Park. In the third minute something unexpected happened. Greenwood went to shoot under pressure and scragged the ball in a sad arc toward the corner flag. In the process he ended an extraordinary run of three goals scored from a total of just three shots in his last two games.

Little is wasted here. Greenwood’s record now reads: 15 shots, eight on target, and five goals scored in his last seven games. This is a player whose chief skill is the ability to reduce a wild, concussive sport to something that feels like clarity.

“It won’t be long before he’s knocking on the door wanting to play centre-forward,” Gary Neville observed during his punditry duties, but this also feels a little generic. As a right-sided attacker Greenwood’s United career record reads: played 11, won 10, drawn one, with four wins and four goals from that position in United’s last four league games.

There is nothing that needs fixing here, just a footballer with the brains and the mobility to play outside those rigid lines. Even the way he attacks defenders is thrillingly calculated, gliding from side to side like a speedskater, always finding angles, switching feet, taking you into places you don’t want to go.

Again, this is not the standard version of youthful attacking exuberance. Perhaps it explains why people are keen to compare Greenwood to other footballers. Most common is Robin van Persie. There is also something of a young Alan Shearer in his certainty, his two-footed shooting power, his easy physicality.

Five minutes after half-time at Villa Park he carried the ball forward, cut across goal, played a cushioned pass inside with his left foot, took it back with the other, then spanked it with thrilling power into the corner.

He walked back looking fine, cool, comfortable with all this. This seems to be his way. Greenwood is calm. Greenwood is fearless. Perhaps he’s just clear-sighted.

Because if something has changed recently, it is the energy around talented young footballers. That feeling of vertigo is gone, the sense of people clinging to the side of some sheer face, terrified by their own precarious destiny.

A good point of comparison for Greenwood is to list the players he’s not like. In particular he’s not like Michael Owen or Wayne Rooney or Robbie Fowler, prototypes for the modern-day precocious English striker, all of whom seemed to emerge with cartoonish mega-strengths: lightning speed, street football super skill. Here they come barrelling out into the adult world like some supercharged street car, all gleaming exhausts and rebored engines, burning through the liquid gas of their own extreme talent.

Whereas Greenwood is something sleeker and more assured. And really why would he be anxious about anything? There has never been a better time to be a teenage prodigy.

These are managed, mature young men, academy-schooled for this moment, the world around them less volatile and less shrill. In a way youthful talent has never had it so good, or seemed so certain of its own shape.

No doubt talent will remain a problem, something to be fretted over and picked away at. But whether he really is “massive”, or merely quite good, or good for a while, this does feel like an unusually good time to be Mason Greenwood. – Guardian