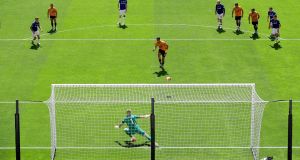 It is correct to begin by hailing the victors, particularly when they are as good as this. For anyone seeking a snapshot of Wolves’ identity under Nuno Espírito Santo, this match would be a fair case study. They had not been at their best in the previous week, looking sluggish enough to suggest their top-six credentials were at severe risk, but after a slow start they pulled clear and should have won by more.

Solid, methodical, supremely drilled and allowed to spark into life around the final third: the now-familiar notes were all hit and there remains, for now at least, the hope that next season’s Champions League will dance to their tune.

Wolves were helped, though, by an Everton performance vapid enough to be listed among the worst in this Premier League season. You could exhaust your range of pejoratives but a few will do: this was gutless, listless, drainingly passive fare that cannot easily be excused by the fact that, even with a win, they would probably have been condemned to mid-table.

Carlo Ancelotti has worked with far better players than these, many of whom will surely be shipped out if takers and replacements can be found, and will be best judged when he can enlist a few of his own. The nagging doubt is whether he can bring them to a level comparable with the clarity Wolves radiated here, which seems a daunting benchmark.

“The technical aspect was not good enough but the spirit of the team was unacceptable,” said Ancelotti, who was in no mood to offer excuses. “We have to show in the last three games that we have a different attitude. It doesn’t matter what the result is; you have to show professionalism on the pitch.”

That had been lacking from the start and, by the time Adama Traoré smacked a sitter against the crossbar late on, any semblance had long since departed. Traoré had begun on the bench and it was his replacement, Daniel Podence, who offered the spark that set Wolves off.

Podence was starting his first league game since joining from Olympiakos in January; he has deft, devilish feet and a smart turn of pace but Nuno had favoured a slow immersion until consecutive defeats to Arsenal and Sheffield United. The Portuguese winger worked Jordan Pickford twice in the first 26 minutes, drawing a fine near-post save on the second occasion, and finally picked the lock shortly before half-time.

The route to goal seemed crowded when Podence received possession near the right side of the box, but he evaded the attentions of Leighton Baines and Anthony Gordon, slipping the ball through the latter’s legs, and then contrived a dragback to lose Lucas Digne. A split-second later he was on the floor, Digne making enough contact with his trailing foot to concede a spot kick, and Raúl Jiménez dispatched the gift.

Ancelotti had set up with five in midfield but it had no positive effect on Everton’s craft. They were unfortunate when Yerry Mina departed through injury and it also felt cruel when the 18-year-old Jarrad Branthwaite, introduced at half-time to compensate for that loss of height, instantly conceded a free-kick and let Leander Dendoncker run off him to head Wolves’ second.

But their failure to muster the faintest hint of a comeback spoke louder than any of those woes. Diogo Jota, a substitute alongside Traoré, lashed an excellent third goal after a masterful 70-yard ball from Rúben Neves. Other openings came and went, to the displeasure of the reliably deadpan Nuno.

“Our finishing was not so good,” he said. “It’s something we must commit to. It doesn’t matter, the result: you must try to make things right.” Two managers, two near-identical turns of phrase; it was the only thing they had in common all afternoon. – Guardian

Leinster look ready to step things up and burn off Saracens challenge 06:00
Misfiring Ulster facing a torrid time in Toulouse 06:00
Etneya win at Gowran would prove a fitting tribute to Smullen 06:00
O’Sheas and Breaffy looking to take final step to a first Mayo senior title 06:00
Paul Galvin’s Wexford departure takes a little of the shine off things 06:00

1 Rory McIlroy battles to stay in the mix as Patrick Reed leads the US Open
2 Born to ride, born to win: Sam Bennett, the making of a green machine
3 Leinster look ready to step things up and burn off Saracens challenge
4 O’Sheas and Breaffy looking to take final step to a first Mayo senior title
5 Will Connors now delivering on his massive potential
Real news has value SUBSCRIBE