If Guardiola’s side beat Real Madrid they could face Barcelona 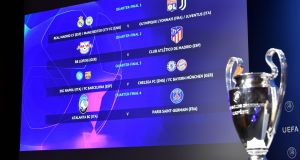 The Champions League draw was made on Friday. Photo: Harold Cunningham/UEFA/AFP via Getty Images

Manchester City will face Juventus or Lyon in the Champions League quarter-finals if they defeat Real Madrid. Their path to the final would then be blocked by one of Napoli, Barcelona, Chelsea or Bayern Munich.

City hold a 2-1 lead from the first leg of their tie against Madrid and have the go-ahead to play the return at the Etihad Stadium in early August.

The draw opens the possibility of Pep Guardiola facing his former club Barcelona in the semi-finals. Barça drew 1-1 at Napoli in their opening leg.

Chelsea, the only other British club remaining in the competition, will face Barcelona or Napoli if they overturn a 3-0 deficit against Bayern Munich in Germany in the last 16.

Four teams reached the quarter-finals before the coronavirus pandemic forced football to stop and they have been drawn to face each other in the quarter-finals, with RB Leipzig taking on Atlético Madrid and Paris Saint-Germain facing Atalanta.

The tournament will be played in Portugal from the quarter-final stage, with one-off knockout games, starting on August 12th and ending 11 days later.

Route to the final