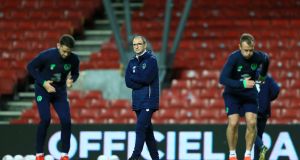 Martin O’Neill has confirmed that both Jeff Hendrick and Stephen Ward are available to be selected for Saturday’s World Cup play-off against Denmark in Copenhagen, and the pair are both set to start as Ireland look take a significant step to their first World Cup in almost 16 years.

“Getting to the Euros was a great achievement,” said the Ireland manager.

“There were some great performances in France and men like the man sitting to my left (Robbie Brady) forged great reputations for themselves. Getting there was big but the World Cup is something else. If we could make it, it’d be fantastic.”

The 65-year-old refused to make any prediction about the outcome of the two games but said that having overcome major obstacles in the past, most recently Wales last month, they would be out to do the same again. He cautioned, however, against getting carried away with the notion that the Danes were in some way a soft touch because they were the lowest ranked of the seeded sides in last month’s play-off draw.

“My own view was that because of the quality and experience of Italy, I don’t think any of the non-seeded sides would have wanted Italy - but we are unseeded so every seeded side is above us.

“When the draw was made, because it wasn’t Italy, there was a general view that ‘Oh, that’s fine’ but it’s not fine. These games are tough; they have quality players who are playing around Europe, they might have the stronger choice of players because they have players playing at a high level in Europe on the bench. They beat our old adversaries Poland 4-0 here, they had a strong finish, this is difficult but,” he concluded, “we take our position (in these play-offs) on merit. Now we have to go again.”

1 Getting behind the rotten core of rugby with Dan Tuohy
2 Football fan survey: Almost half of Irish adults say they support a club
3 Irish squad in the dark as clouds hang over Six Nations
4 Larry McCarthy to become first overseas president of the GAA
5 Football fan survey: Manchester United still top the league among Irish fans
Real news has value SUBSCRIBE
Crossword Get access to over 6,000 interactive crosswords