‘Can you imagine the young players at this football club learning from Robbie?’ 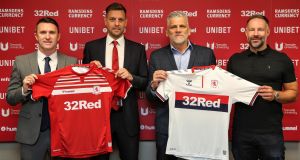 At his unveiling as Middlesbrough’s new manager on Friday, Jonathan Woodgate nodded towards the man sitting opposite him in the front row of a packed room at the club’s training ground, and said: “We all know Robbie Keane and that he offers a lot – can you imagine the young players at this football club learning from Robbie Keane?”

The question was rhetorical, part of an upbeat launch of the Woodgate-Keane era on Teesside. Keane did not speak, but his presence was felt as first his old teammate from Leeds United and Tottenham, Woodgate, saluted the Dubliner, and then Boro chairman Steve Gibson did the same.

“We’ve got a forward on our [coaching] books, and that hasn’t always happened at this football club,” Woodgate (39) said of Keane (38). “It’s great that he’s with us.”

Woodgate, in his first head coach role, outlined an attacking playing philosophy similar to that which got Wolves and Norwich City promoted from the Championship in the past two seasons, and he clearly sees Keane’s goalscoring knowledge as essential.

“Firstly, I want to pass the ball,” Woodgate said. “Pass the ball, keep the ball. I want players to run with the ball. That’s my philosophy, that’s what I want to do. I want to win games scoring goals.

“If you look at this league now, you go up by scoring goals. If you don’t, you won’t go up. If you look at my backroom team: Leo [Percovich], Danny [Coyne] and Robbie, we’ll have that in abundance – especially with Robbie by my side.

“At Spurs with Robbie it was an attacking team – we’d sometimes defend two on two at the back. It was the same in the Leeds days with Lucas Radebe and Rio [Ferdinand], with full-backs pushing on.”

Eighteen years ago Woodgate and Keane were part of the adventurous Leeds team assembled under David O’Leary, and although O’Leary’s name is heard infrequently Woodgate mentioned him.

“David O’Leary was in exactly the same position as I am now. Forty-year-old, he put young players in. What did we do: sink or swim? We swam.

“That’s what’ll happen at this club. Don’t get me wrong, I’m not going to put them in willy nilly, there’ll be a time to put them in. But I will 100 per cent put a young player in if he is better than the senior player. It’s as simple as that.”

Gibson, who said he met Keane a couple of nights ago and joked that he was still recovering, was equally complimentary. “What can we say about Robbie? I think it’s fantastic we’ve been able to attract someone of his calibre to this football club.”

Middlesbrough and Keane will discover their first Championship opponents when the fixtures are released next Thursday.

1 Owen Doyle: Creeping professionalism of schools rugby a threat to the game
2 Caroline Wozniacki’s career ends with defeat to Ons Jabeur
3 Niall Quinn happy to step into the breach at FAI
4 GAA officials and referees brace themselves as new rules kick in, and this time it's for real
5 Scotland’s Finn Russell missed training after Sunday drinking session
Real news has value SUBSCRIBE
Crossword Get access to over 6,000 interactive crosswords