‘He always let me know how brave I was standing by my beliefs, that I was never alone’ 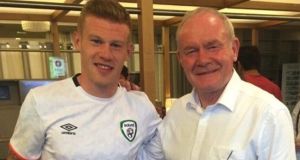 He wrote: “Writing this with a heavy heart, bad week just getting worse. Woke to the passing of Martin just now, am not going to shy away in expressing either how I feel.

“Not only was he a hero of mine, someone I looked up to, a man that has done so much for Irish people and Irish people’s freedom right to the very end, he was also a good friend and someone I had the pleasure of having a good relationship with, a man I met so many times, had the privilege to share many a great conversation with, a man that always text me before games wishing me luck, a man that through the well documented tough times off the field always let me know how brave I was standing by my beliefs, that I never was alone because I had his support and backing always.

“You will be sorely missed Martin, a great leader, a great hero and above all a great man. Thinking on all your loved ones.”

McClean, who represented Northern Ireland at Under-21 level before opting to play his senior football for the Republic, found himself at the centre of controversy during his time at Sunderland when he refused to wear a commemorative poppy shirt in November 2012, and is still booed by Black Cats fans as a result of his stance.

He was also accused of turning his back on the British national anthem before a West Brom friendly in the United States in 2015.

McClean was not the only Ireland player to salute Mr McGuinness with injured defender Shane Duffy, another Derry native, tweeting: “More tragic news this morning, RIP Martin McGuinness, a true hero for many of us. God bless your family and close ones.”

Duffy, who plays his club football for Brighton where five people were killed when the IRA bombed the Grand Hotel in 1984, received a series of replies, some critical and some supportive, before adding: “I’ll always stand by what and who I support, it’s the way I was brought up.”

1 Next stop the Champs-Elysées in green for Sam Bennett
2 Born to ride, born to win: Sam Bennett, the making of a green machine
3 Saracens’ emphatic opening salvo enough to keep Leinster at bay
4 Saracens deliver the brutal blueprint on how to beat Leinster
5 Lance Armstrong’s latest move serving him well on many fronts
Real news has value SUBSCRIBE
Crossword Get access to over 6,000 interactive crosswords