Chris Coleman: ‘We’re a very good team when we’re at our best’ 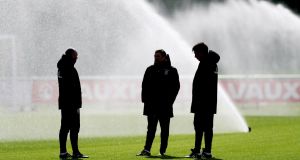 Wales manager Chris Coleman and his staff wait for the players to arrive for a training session on Tuesday at the Vale Resort, Hensol. Photograph: PA

Chris Coleman has described Wales as in “pretty good condition” after avoiding the injury problems which have beset World Cup rivals the Republic of Ireland.

The Republic have had to contend with a catalogue of injuries ahead of Friday’s crunch Group D qualifier at the Aviva Stadium in Dublin.

The 17-year-old striker joined the likes of Gareth Bale and Aaron Ramsey at their Vale of Glamorgan base for the first time, and third-placed Wales appear in good health as they attempt to close the four-point gap on group leaders the Republic.

“We are a very good team when we’re at our best and at our strongest,” manager Coleman said.

“We need these players on the pitch consistently and we’re in pretty good condition.

“The squad might have looked different two or three months ago.

“But we’ve got players back, and I’ve picked those who have been on the front foot and are most ready for this challenge.”

The Real Madrid forward’s recent comeback from ankle surgery is a huge boost for Wales, as is Arsenal midfielder Ramsey’s return from a calf strain.

Ramsey was arguably Wales’ best player in their march to the semi-finals of Euro 2016 last summer.

But his World Cup contribution so far has been minimal, with injury ruling him out of the opening three qualifiers.

“In these first four games we’ve only had Aaron in one of them,” Coleman said.

“That’s tough for us, and we’ve only had Joe Allen for two and a bit as well.

“We’re looking forward to having Rambo back. He’s had game time at Arsenal and he’s feeling good.”

This is Wales’ first game since Coleman turned down overtures to take over his home town club Swansea at the turn of the year.