Martin O’Neill has no major headaches but decisions to make

James McCarthy’s absence would put Murphy, McGeady and Myler in the frame 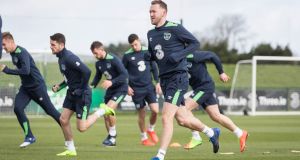 Martin O’Neill used 38 players in the Republic of Ireland’s 13 games last season but when it comes to picking his starting line-up for Friday’s night’s game against Wales, it is hard to see too far beyond those who played in the European Championships and in the three most recent World Cup qualifiers, all of which were won.

Twenty Irish players made it onto the pitch at some point in the games against Georgia, Moldova and Austria, while Richard Keogh and Daryl Murphy are the only two of four additional players used in France that O’Neill is in a position to recall.

Keogh, who played 90 minutes against Italy and France at the Euros and lined out against Serbia in the first game of this campaign, is likely to be another starter, making it 10 out of starting XI. That leaves one place up for grabs between Murphy, Aiden McGeady and David Meyler.

If McCarthy is fit, it is likely he will complete the team, with the other three starting on the bench; if not, one of that trio will come in, with O’Neill looking for the right balance against a dangerous Wales side.

Murphy started in the same side as Long against Italy and France last summer but Walters was ruled out of the first game by injury and was well short of full fitness for Ireland’s last game at the tournament. This time it is the Waterford man who is suffering from a calf strain. Even if he shakes it off, however, judging by O’Neill’s selections last year, Murphy will have to leapfrog one of the other two to make the starting line-up.

It seems more likely either McGeady will return to the team for his first competitive start in two years, or Meyler will retain his place having done well against Austria when he replaced Whelan.

Meyler is the more straightforward and safer choice, with the Hull City midfielder simply sitting in alongside Whelan on this occasion, either in the middle of a midfield four or in a holding pair.

Last week, O’Neill said he believes the 30-year-old to be more effective on the flanks. In that case, Walters would move in to support Long, while McClean and McGeady would be expected to be fairly interchangeable over the course of the 90 minutes.