James McCarthy has until Wednesday to prove fitness 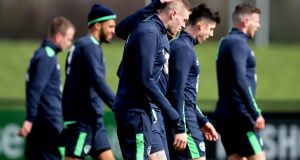 James McCarthy remains “very doubtful” for Friday’s World Cup qualifier against Wales according to Roy Keane while Daryl Murphy has become the latest player to be ruled out of the game.

The Everton midfielder missed training again on Tuesday morning and the Republic of Ireland’s assistant manager suggested that he would have to play some part on Wednesday if he was to have a realistic chance of starting at the Aviva stadium on Friday evening.

“James didn’t train today and I would say very doubtful,” said the Corkman. “I think he had another scan yesterday and I think he did a bit of running today but if he’s wasn’t to join in with the group tomorrow then it would be very difficult because it’s getting very close to the game.”

Murphy has been ruled out with an ongoing calf injury but Shane Long is still on course to start despite having also missed the bulk of the latest training session.

“He played an hour (for Southampton on Sunday) so obviously the fitness, so that’s just standard procedure, he’s still doing his recovery. Shane will train tomorrow. We would expect Séamus (Coleman) to train tomorrow and maybe (Jonny) Hayes (both ankle) as well.”