Martin O’Neill: We don’t have the depth of some countries but we’ll be ready 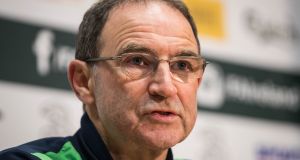 The derby day nature of it all may yet, Martin O’Neill suggests, turn the visit of Wales this Friday into something like Ireland’s to Glasgow a couple of years back; “a raw battle,” as the manager remembers it.

But if so, the hosts had better keep the casualty count to a minimum for they are already down to the bare bones when it comes to established starters.

Wes Hoolahan became the latest to withdraw injured yesterday with a scan on his thigh strain confirming what his club had claimed on Saturday; that he is weeks away from starting another competitive game.

James McCarthy remains a major doubt and Daryl Murphy a significant one too leaving O’Neill to make at least five changes to the side that won in Vienna then worry about just who it is he might spring from the bench when legs get tired or the game needs changing.

If McCarthy makes it, he has, to be fair, just about the makings of a familiar starting line-up but there are a couple on the fringes who will see the possibility of getting some game time and O’Neill suggested his squad’s familiarity with the opposition might make giving them some that little bit easier.

“Would there be comparisons here with the Scotland matches that we’ve played?” asks O’Neill rhetorically as he weighs up the situation. “Maybe, because the players are so familiar with each other?

“There is an element of that, so perhaps throwing someone in at the deep end might not be as severe here as going to a game in Belgrade or something like that. I’ll see. We’ve just gathered and by Wednesday we should have a fair idea of who is fit and who is not.”

Séamus Coleman, who, like Jonny Hayes, sat out yesterday’s first session of the week due to an ankle injury, will be back training with the group by then, the manager insists, but the “not” list already included Ciaran Clark, Shane Duffy and Harry Arter before the Hoolahan news came through.

By contrast, Chris Coleman’s squad is relatively problem-free ahead of the game although the visitors did lose Ipswich striker Tom Lawrence yesterday.

O’Neill could, in the circumstances, be forgiven for the feigning of amusement as he recalled the launch of the Euro 2020 launch in Dublin back in November when he was asked about Gareth Bale’s then recent ankle injury in a manner that suggested a fully fit Ireland might somehow make hay against the rest of Coleman’s men in the absence of their star midfielder.

Now, he noted wryly: “They are relatively strong and we’re not at our strongest. That said,” he continued, “we’ll be ready for the game.”

The injuries, of course, are one thing, a largely unavoidable occupational hazard at this level of the game; the Robbie Brady suspension, he made clear, quite another.

The Dubliner will miss this match because he needlessly kicked the ball away with Ireland leading Austria 1-0 and was booked for his trouble in Vienna.

“Robbie said last night that he hadn’t known he had already picked up one yellow card,” said O’Neill. “Well, you would think that would be pretty foremost in your mind. There are only two. That was kind of daft but it would be nice if he had have been available because he is actually fit, so that is the irony of it all. There we go. We will miss Robbie but we will be fine, we will absolutely fine, honestly.

“We wouldn’t have the strength in depth that other nations would have but honestly, it doesn’t matter. We’ll field a side for the game; we’ll get prepared and be ready for the game, absolutely ready for the match.

“When you have a long campaign, the games are, by contrast to league matches in the Premier League or the Championship… they are relatively few so every game is very important to us.

“We’ve gotten off to a decent start and we have some games at home coming up and I said before, that’s where it will be decided. But this has always been a group where teams are capable of taking points off each other and so it has proved. Wales won’t feel as if they are out of it at all, not by any stretch of the imagination, and their experience of the Euros will stand them in good stead.”

The Welsh might come here all guns blazing then but “we will go into it with as much gusto as possible,” O’Neill added.