Which Premier League club is most supported in Ireland?

Based on Facebook interactions, Manchester United and Liverpool lead the way 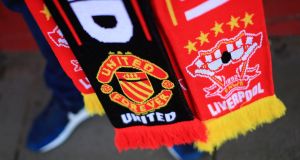 Manchester United have the largest support of any of the Premier League clubs in Ireland, according to Facebook interactions. Photograph: Getty Images

Manchester United are the most supported Premier League club in Ireland, according to Facebook users in a recent interactive survey.

Using data from Facebook’s audience insights, the Unibet sponsored survey is based on interactions with the official club Facebook pages; via either likes, shares, comments or follows.

The survey uncoveres which club has the strongest global fan base, as well as the relative popularity of these clubs in each country. And the results unsurprisingly revealed that Manchester United and Liverpool are the top two supported clubs in Ireland.

Ireland’s favourite Premier League team is Manchester United (170,000 Facebook followers), ahead of Liverpool (157,500 followers). Next up are league leaders Chelsea, followed by Arsenal and then fellow London club Tottenham.

Another London side, West Ham are next, ahead of Manchester City and a surprise inclusion in Crystal Palace. Everton are ninth, while the 10th most supported club is Hull City.

The same top four are the most supported teams in Dublin, with Southampton creeping into the top 10 at the expense of Hull City.

The top five countries that United are supported in are Tunisia, Ethiopia, Malaysia, Kenya and Ecuador (Ireland are eighth).

Liverpool’s support is greatest in Uruguay, with the third largest share coming from Ireland. Chelsea are most supported in Portugal, and Arsenal in Ethiopia.

United, Liverpool, Arsenal, Chelsea and Spurs have had 68 Irish players play for them in the Premier League era. Including the likes of Damien Duff, Robbie Keane, Roy Keane, John O’Shea and Steve Finnan.

At the start of 2017; 174 Irish players had played at least one competitive game in the Premier League.