Bastian Schweinsteiger is heading for the MLS

United wrote him off as an asset in their accounts, but he worked his way back 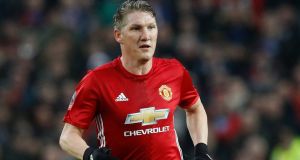 Manchester United midfielder Bastian Schweinsteiger has joined the Chicago Fire, it was reported on Tuesday.

The German World Cup winner will move to the Major League Soccer club on a one-year contract, the Chicago Tribune newspaper said.

It quoted 32-year-old Schweinsteiger as saying: “Throughout my career, I’ve always sought opportunities where I hoped to make a positive impact and to help make something great. My move to Chicago Fire is no different.”

United confirmed the deal, subject to a medical and visa, on Tuesday morning. They tweeted a quote from the outgoing midfielder saying: “I’m sad to leave so many friends at #MUFC but grateful to the club for allowing me to take up the challenge at Chicago Fire.”

Schweinsteiger joined the Red Devils from Bayern Munich in July 2015 but has struggled to make the impact expected of him.

Manager Jose Mourinho did not play him this season until a November 30th EFL Cup match against West Ham, and Schweinsteiger has made four appearances in all this term.

At one stage United even wrote him off as an asset in their accounts.

The Chicago Fire are certain he will be of value to them.

Fire general manager Nelson Rodriguez told the Chicago Tribute: “We’re adding someone who has won at every level, including the very highest levels, and has done so in a way that is consistent with our values.

“We as a club will now be forced to hold ourselves to a higher standard, an accountability level. Previously, I think we could satisfy ourselves with what is known domestically. Now we need to rise to a standard that is set more internationally.”

According to the report, Schweinsteiger could join up with his new club as early as next week, on a base annual salary of $4.5 million and with an initial one-year contract.

Fire coach Veljko Paunovic said: “We know it’s going to take some time and adjustment for him coming to the new league, new coaching staff and everything. We also know we can rely on his capacity to adapt and do that fast.

“He can produce actions that few players in the world can do. He sees (things) that nobody sees. He opens the eyes of the fans, where you can hear the people say, ‘Wow!’.”