His international career was essentially ended by the infamous grandmother episode 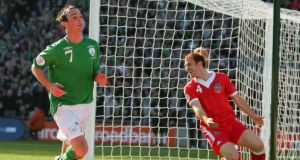 Stephen Ireland of Ireland celebrates after scoring during the Euro 2008 qualifier against Wales at Croke Park. Photograph: Ross Kinnaird/Getty Images

He is injured, of course, so the question does not really arise but just for the sake argument, how many more than 39 players would Martin O’Neill have had to name in that provisional squad of his last week before he got to Stephen Ireland?

He certainly seems to have held him in some regard in the past with reports at the time suggesting that the groundwork for the midfielder’s 2010 move from Manchester City to Aston Villa predated the northerner’s departure and O’Neill is said to have inquired about the player’s availability after taking on his current job.

On each occasion, though, O’Neill might be forgiven if he regarded missing out on the opportunity to work with the now 30-year-old as a bullet dodged. The former Celtic, Leicester and Sunderland coach often gives the impression that he rather enjoys working with challenging cases but in terms of persuading a player to shake off the tag of “underachiever,” he is probably happy to devote more of his time to staying on the case of personal favourite Aiden McGeady.

He may well feature this Friday, a decade to the day since he came on late in the 1-0 win over Wales at Croke Park. That game was Stephen Ireland’s most memorable of six senior outings for his country.

At just 20 years-old, he had impressed with the way he carried himself in a pre-match press conference at which he was wheeled out to refute the suggestion by Roy Keane that Cork born players traditionally got the short end of the stick.

Then, in the game itself, he looked like a player Irish managers might look to build a team around for half a dozen qualification campaigns to come.

Certainly his goal, a coolly finished strike from a tight angle after powering forward from central midfield to get onto a first time Robbie Keane pass, was the sort the team could have done with more of in the campaigns since.

Instead, his international career was essentially ended a few months later by the infamous episode in Prague where he lied about the death of his grandmother.

Still, he was named City’s Player of the Year for the 2008/09 season during which he scored 13 goals (he has scored just 10 more in the seven and a half seasons since) but never quite recaptured that form and when Mark Hughes was sacked his days seemed numbered.

Roberto Mancini initially suggested the midfielder needed to “change his head” and improve his attitude - but the Italian quickly ran out of patience with the Irishman who was just one year into the five year deal worth £65,000 a week that his big season had earned him.

There was no great shame in failing to make the cut at a club intent on spending its way to the top but Ireland’s comments as he was shunted out the door didn’t do him any favours.

Ireland insisted he had “practically always” been the best player in training, that the club had spent three years trying to replace him without success and that Villa had got much the better of a deal that involved James Milner heading the other way (City also paid £10 million). As if to ensure maximum impact he teed up all of this at his Villa unveiling with the claim that “I am not a highly self-confident person”.

For good measure, he slagged off the club’s young players with their “£10,000 watches” despite the fact that he had had the press around to take pictures of his home which contained what was reported to be a £100,000 fish tank.

At some point during all of this, Giovanni Trapattoni went to meet him and came away, it seemed, more bemused than he had looked in the countless press conferences where various journalists sought the latest on what the Italian was doing to get Ireland back on side.

The player’s account of the encounter, in which he essentially suggested the manager had been arrogant and disrespectful towards him, might have been considered the final nail in the coffin of his international career were it not for the fact that the lid had already pretty firmly been secured by that point.

Sadly, he did not seem like much of a loss at that stage and not much has changed since which is a terrible pity because there is no denying the talent he showed during those first few years of his career, both at his club and, on those few occasions country.

His honeymoon at Villa Park was short-lived with Gerard Houllier also making it clear that he had to work harder and while he had a better spell under Alex McLeish, he has done next to nothing to justify the early hype in recent years.

Things initially looked promising when he went on loan to Stoke where he was reunited with Mark Hughes but his best spell at his current club was, arguably, those initial few months before he signed permanently.

Injuries have clearly contributed significantly to his difficulties but he has not started a Premier League game for the club since April 25th 2015 with all 13 of his league appearances last season, when he was fit, coming from the bench.

Which begs the question: what might have happened had things worked out differently and he had delivered on his early promise in full? Could he have helped to save Staunton by continuing to contribute at key moments on the pitch rather than ultimately contributing to the manager’s downfall with his behaviour off of it?

Or when Trapattoni did take over, might his talent have persuaded the Italian that he didn’t have to settle for simply shoring up the centre of midfield so as to make the team harder to beat?

As it turned it out, when Trapattoni sought to do just that, he turned to Glenn Whelan and immediately made him a central figure in his team.

The Dubliner had also had a spell at City in his youth but never played a first team appearance for the club. Few would have ever predicted, the way so many had with Ireland, that Whelan was going to set the Premier League alight. Still, he has consistently made the most of his talent and delivered for his managers in a rather less glamorous role.

The proof of it is there, in the number of top flight games he has played with the 33 year-old having averaged more than twice as many league games as his now Stoke City teammate in recent years. Having been 24 when he got his first senior cap, he might conceivably just make it to the century mark before he is done in the green jersey.

As Houllier put it some years back: “The skill is one thing, but you need to compete”.